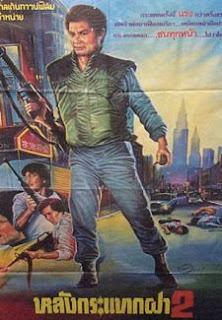 Tuesday Night I sat down to try to write up New York Chinatown as a kind of twisted bonus for our Chinese New Year Celebration but found that I was too agog to put down any sort of remotely rational sentences. Admitting defeat I tweeted out that I had finally found a film I couldn’t write about (this was in response to I believe Chocko’s charge that I can write about any movie.) I went to bed and thought nothing of it.

In the morning I woke up and realized I had to make another stab at it.

New York Chinatown is Don The Dragon Wilson’s first film. It’s a Hong Kong film that was shot in New York and in Jersey City, with every sequence both inside and outside showing some part of the local color.

The plot has something to do with the rivalry between two underbosses of the triad leader. Both want the top spot and eventually the battle between them turns lethal with automatic weapons being fired all over the city. And where are to cops? Sitting in coffee shops not paying attention to the Chinese fireworks. It’s a violent, occasionally bloody affair that leaves almost everyone dead.

Mind boggling dumb. Perhaps it makes more sense in Cantonese but reading the subtitles things just don’t seem right, a fact borne out by some of the occasional English dialog being mistranslated.( The copy I saw is from the late BCI’ Kung Fu Theater and the subtitles are on the print)

In its way this is a perfect movie for a bad movie night with friends. It’s one of those films that makes you wonder what were the filmmakers thinking.

I have not had a chance to fully research the film but I suspect that the film was made in New York because it’s thriving Chinese population would have welcomed in the filmmakers and the NYC setting would have allowed for an exotic location at reasonable price. I think that the film not being made by American or European filmmakers allowed for the film to be shot not only in the heart of Chinatown but also on some back alleys and streets that regular filmmakers would never have gone to. This is New York in all its late 1970’s ignominy.

What I like about the film is the New York locations. Over the last decade or so I’ve been haunting bits of Chinatown and it’s so cool to see chunks of it as it was back about 1981. To be certain almost all of the store fronts have changed in the last 32 years but the buildings haven’t, it’s also cool to get to see the inside of at least one of the legendary, though now gone, movie palaces.

An interesting thing about the film is how New York is portrayed, basically as a hell hole. The streets are dirty. Vice is rampant- one of the characters is driving around with a naked girl in the back of a van, there is a gay rave, the cops don’t care and don’t understand the Chinese, and gun fights are a constant occurrence. Any place that isn’t a battle ground (say the Metropolitan Museum of Art or the horse drawn carriages along Central Park South) is deserted.

Probably not but this is how some people saw it.

As a New Yorker I see this as a this is a wild time capsule of the bad old days.

Do I recommend the film? I have no idea. As I said it’s a mess. If you’re a Don Wilson fan or Hong Kong action fan or someone who like New York films or a bad movie lover give it a try, otherwise you may want to steer clear.

I should also state that despite being released as part of the Kung Fu Theater series there is almost no martial arts in the film. There are martial arts demonstrations but no battles, the battles all involve guns, particularly automatic ones.
Posted by Steve Kopian at February 17, 2013