Art of Action:Martial Arts in the Movies(2002) 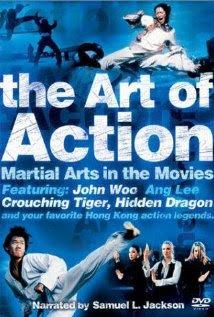 Produced by Starz cable network and narrated by Samuel L Jackson this is a history of martial arts films from the silent days to modern day. It also details the history of the martial arts from the Shaolin Temple to the Peking Opera into the movies.

A solid reasonably detailed look at the martial arts film scores over many other similar looks because it is filled with interviews of filmmakers, actors and actresses. It's great to see Ronnie Yu, John Woo and Ang Lee talking about the films that are important to them. Blessed with tons of clips the film is a wonderful way to see just how many good films are out there.

The problems with the film comes from a few points. First the film is very person oriented. The film lays out the progression of Martial Arts from the Shaolin Temple on to film and it names names giving us important actors and directors. Once we get to 1970 the film goes from the Shaw Brothers to Bruce Lee it then jumps to Jackie Chan and his opera brethren, on to Jet Li. While these people are the peaks of the genre the film leaves out the films that were influencing things outside of these people. Where is King Boxer (Five Fingers of Death) which along with Bruce Lee changed the way the West saw arts films?

There is a problem in that once the film gets to Jackie Chan the film kind of gets lost. Suddenly it has to deal with too many important people and so it just kind of throws much of them to the wayside or gives them the short shrift. For example while John Woo is interviewed and his films are discussed his influence on the genre is outside of the true martial arts field but involves the inclusion of guns. (I suspect part of this was the result of them focusing on the films and people they could interview or could get clips of)

It's not by any stretch of the imagination a bad film, rather one has to keep in mind that once the film hits Bruce Lee things are more focused toward who they could get rather than the complete history.

Definitely worth tracking down, especially for the extended clips.
Posted by Steve Kopian at February 03, 2013