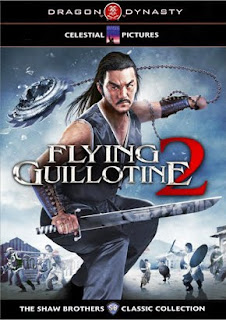 Direct sequel* to Flying Guillotine begins with an assassination attempt on the emperor. It also quickly shifts to an action set piece as rebels meet to discuss the next step in opposing the emperor. and the royal guards break in and heads begin to go flying. From there the film goes in several directions as we follow the rebels and their attempt to kill the emperor and the emperor continues to find Ma Teng, the hero from the first film, who has developed a means of countering the flying guillotines.

Filled with flying heads and body parts the film is to a large degree non-stop action as the emperor and the rebels battle it out. Things get complicated when the emperor develops a new version of the guillotine and trains a new squad of assassins to use it.

Much more action than the first film I don't think more than five or six minutes passes with out some one fighting someone. The film is also much darker. More than a good number of people die on both sides of the rebellion. People die badly and characters we've grown to like perish with frightening regularity. This is a rare action film that not only has weight to to what is going on (any victory will cost heavily)  but it is willing to lose people to prove it's point. And when you see the film you will understand why there was never another direct sequel (though there are a couple of semi-sequels)

For me the wonderful action and the willingness to go dark really impressed me. In a year when I was picking back over old "classic" martial arts films it was really nice to see one that exceeded it's reputation. In all honesty I know why the film influenced other films.

While the film can be seen on it's own I do recommend that if you really want to get the full effect that you make an effort to see the first film before this. Even if you don't I highly recommend this film.

*- The film was not started as a sequel, but as a completely unrelated film. When that film failed to work it was reworked as a sequel to the first film.
Posted by Steve Kopian at February 16, 2013