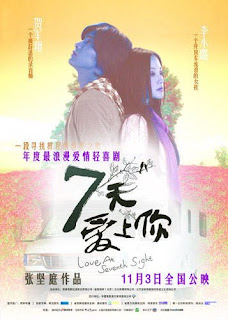 This penultimate film in our Chinese New Years celebration was discovered when MrC was ordering the series and he discovered that we didn’t have enough light films. Panicking the pair of us dove back into the stacks and film lists and started to try and find something that didn’t really involve fists or guns or flying guillotines. (actually we found several, just not many we actually liked enough to mention)

Love at Seventh Sight is a romantic comedy… well it’s a romance… It’s a romantic film the likes of which you will never ever see in an American movie. I'm not sure it works but god damn it’s different enough that it’s worth trying should you find it.

Actually it’s worth trying with the caveat that you stick through the first 45 minutes or so which are saccharine sweet in the dying girl movie of the week way that you may get diabetes.

The film begins with a young man who records sound for documentaries. He ends up on a road trip with a young girl who effectively kidnaps him. They then drive off in a motor home across China. As they grow closer the specter of permanent separation rears its ugly head. With the young lady out of his life our hero slides into depression, until one day outside of the house he is watching over he sees a young lady who looks exactly like the lost love of his life…

What a really strange film.

I honestly don’t know if I like the film or not but it’s not like any other film I’ve seen. Well it is, but it’s not. This is a really off the beaten track romance that really works hard not to be typical. The twists and turns are frequently not what you expect from a film like this. It doesn’t make a whole hell of a lot of sense but it’s amusing and not boring…with a dose of emotion…

The film has two small problems. The first is the opening 45 minutes which are so rote and by the numbers that it is kind of dull. We’ve been here or a variation of that.

The second problem is that leads, while good, don’t have a real chemistry. Yea they are good looking and cute, but they seem more like brother and sister than hot for each other lovers.

It’s not bad, but it could have great instead of just good.

Worth a look if you want to see a romance unlike almost every other.