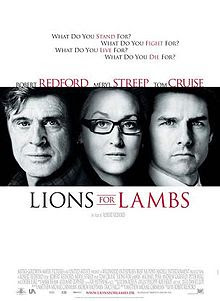 A three part film- Tom Cruise is a senator talking to reporter Meryl Streep about a new push in Afghanistan, Robert Redford is a professor trying to get a student to become engaged, and a platoon in Afghanistan begins Cruise's new push. Its a searing indictment of everyone in this country, on both the left and the right. No one is spared other than the military who are shown to be being throw away because our leaders don't care and because we really don't give a shit. Its a film thats going to really should piss off everyone.(no "one" is to blame, we all are)

As films of ideas go its very thought out and well argued. The problem is that its not very engaging. If you don't turn the film off after ten minutes odds are you'll ponder what you've seen but the trick is going to be willing to stay the course since the film is about whats being said on a level other than a dramatic level. Indeed even the characters, though they are well played and real, are more representational of ideas rather than actual people.(Media (Streep), Government(cruise), our founding fathers (Redford), ourselves (student)). I continued watching the film not because I was deeply engrossed on any level (say as in the early bits of Mind Walk, or My Dinner with Andre, or even-gasp- What the Bleep do we Know), but rather because it was a well thought out position piece that that was polite enough to ask me to consider its points. It isn't screaming left or right its just a piece that kind of takes stock of where we are and lays it out for us to consider. There are no real answers.

Clearly its a big ballsy move to make a "movie" like this and put it out for a public that prefers action to ideas. Its a movie that's road to box office hell has been paved with the films good intentions. Don't get me wrong, I do like the film, I just don't love it. I admire what its doing more than anything. To be honest I don't know if I can recommend the film, certainly I can't see paying 11 bucks a head to see it but on cable this is probably worth a gander, especially if you're willing to let the film say its piece. Ultimately, even though this is very much a movie for now, I think this film will act as guidepost for those in the future who will want to know where we were at this moment in time. I don't know whether that will mean the film is a classic or merely a historical record, thats for future audiences to determine. As for me I'd like something to engage my head and my heart.
Posted by Steve Kopian at February 27, 2013