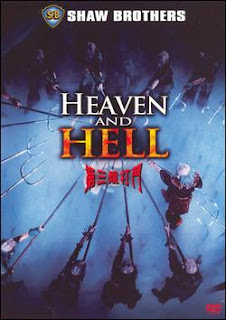 HEAVEN AND HELL. It's wrong in all the right ways. - Marc Walkow

Marc has it dead on. This is the perfect midnight movie. As a midnight mind bender it's completely out there-- I'm not sure how it is beyond that... I'm not sure it needs to be more than that.

The film is structured in three parts, each with a title sequence and a cast list.

The first part is set in Heaven.  At the Celestial Court two souls fall in love and wish to run away with each other. When they try the Celestial Gaurd is called out to stop them. One guard lets them go and he is punished and sent to earth.

The second part  is set on Earth. A couple very much in love runs afoul of a gangster. When the pair runs away and are chased the Celestial Guard, now a cab driver, step in and is shot...and killed....

The last part is set in Hell. As the guard winds his way through hell he is given a chance to reincarnate if he can gather together certain souls and then fight their way out.

The story is that the film was made over the course of several years as money for the project could be obtained. The result is a patchwork head scratcher. At times clearly stage bound, at others its real world at others its all sets. The film mixes theater, musicals (there are several songs), gangster films, horror movies, monsters, martial arts, comedy, fantasy romance and god knows what else into a mix that goes from extremely professional to bad high school theater productions.

I have no idea what to say beyond that there is a very good chance that unless you've seen this film, you've never seen anything like this before. Yes, it has genres and sequences that seem similar to what  you've seen before but never put together quite like this...

Is it any good? By conventional standards no. By psychotronic standards this baby is top of the heap, its a film that demands to be seen at midnight with a large rowdy group of friends that are all on the same wavelength (with each other- no the wave length of the film, I don't know if I want to meet anyone on the wavelength of this film)

This is a must see for anyone who loves out there and very wrong films.