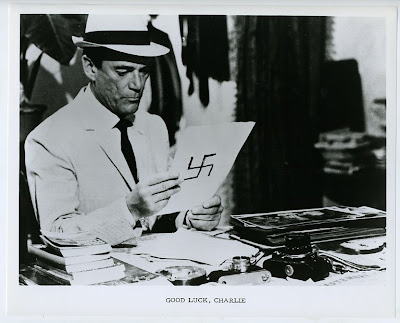 Almost twenty years after the close of the Second World War Charlie gets a call from a friend, he has found the man, a war criminal, that he has been chasing around the world for the previous two decades. Reluctantly Charlie leaves his horse farm in France and goes to Greece to meet his friend. Upon arrival he finds his friend is missing and that he is being followed by various people who don't want the chase to continue. Now Charlie must try to save his friend and find the man responsible for crimes so long ago.

Moody noir-ish thriller that deals with the ideas of guilt and the question as to whether we can ever move on from the past. Was Charlie wrong to leave his friend on his quest, a journey that he himself had sworn to take as well? Should we still chase after the criminals from wars long (but not so long) over? Its not and easy road to travel. This is a film with a great deal on its mind, and once the running back and forth of the first half is dispensed with and Charlie (played by a very good Eddie Constantine) is left with some moral questions the film becomes something more than a simple crime or spy drama.

This is a little seen film that deserves to be found by a wider audience. Its not the be all and end all of 1960's Euro thrillers, however its something more than the run of the mill. Worth keeping an eye out for should you stumble across it.