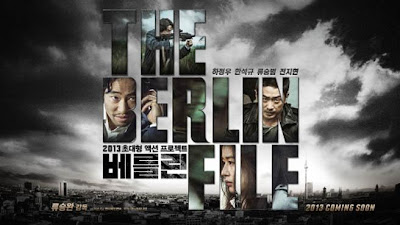 The latest film from Ryoo Seung-wan is a crackerjack action film that’s a throwback to the Euro-spy films of the 1960’s and 70’s. With the Cold War between east and west effectively over, Ryoo Seung-wan has re-set the tensions between North and South Korea in the city that was once a haven for spies of all stripes, Berlin.


Set in present day, a fact that confused the hell out of me since it feels so wonderfully retro, the film follows a North Korean spy as he is sucked into potentially deadly situation when it’s discovered that someone in the North Korean embassy is selling secrets and it looks like his wife maybe the culprit. Things get even more dire as another, much feared spy is sent to Berlin to investigate. Further complications are added by the South Koreans looking into an arms deal, the CIA, the Mossad, Arab terrorists, German business men and a few other factions all with their own agendas

Let me state it simply, I've seen this film twice now and I think when it works it's a great film. This is a real movie movie of the get yourself a tub of popcorn, some candy and a soda and curl up in a theater seat sort of film.

I do have to say that as much as I like the film, I find that the plotting is a bit of a mess. Some of the story relies on understanding what is going on in North and South Korea. The recent regime change in North Korea is a major plot point, and while I could follow what was going on I got the sense that if I really understood  North South Korean relations it would have had deeper resonance. A couple of other twists seem overly complicated to the point I wondered why some of the extra steps needed to be taken (I mean do we really need all of these people to be involved?).  None of this is terrible, it’s just unexpected from Ryoo Seung-wan, who is normally an economical story teller.

All minor reservations aside the real reason to see the film are the action set pieces that punctuate the film. From an encounter on a train to a chase through a subway, to fights in an apartment and a couple in hotel rooms it’s all warm up for a killer sequence in a house in the middle of a field of tall grass that fills most of the film’s final 30 minutes. Trust me on this you’ll be walking out of the film talking about all of the action sequences.

And as for those of you who don’t like reading subtitles, there is no excuse for not seeing the film since a good portion of film is in English.(I'm told over 40% of the film) and was polished by writer/director Ted Geoghagen. To be certain there are a couple of times where the cast of non-English speakers don’t quite get it right (the laundry scene for example), but for the most part they acquit themselves quite well.

Go see this film. This is one of those films you really should see on the big screen if you can mange it. It’s a super film that is going to be so much better BIG than the small. It’s a film of a style they don’t do any more but gloriously pumped up with today’s take no prisoners action.

The first cinematic treat from 2013