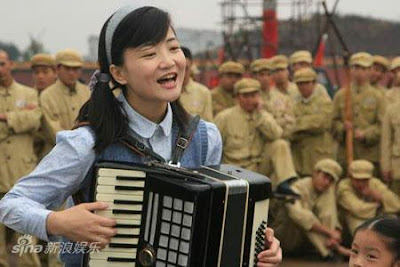 When I saw Tian An Men in 2010 at the New York Asian Film Festival it played in one of the odd afternoon slots that many people avoid, but are actually the hiding place of really great films. Frequently the films in these slots will have no word of mouth on them and seem to make you question the sanity of the programmers until you see the film and you understand why they are running. In many cases these films get one showing before disappearing into the void. I thought that after seeing the single showing that I would never see the film ever again.

Sometime ago I went into a no longer in existence video shop on Grand Street in Chinatown I stumbled on a DVD copy of the film. After I did a sextuple take I picked up the DVD simply to have some record of the film. The man at the counter told me the film had no subtitles, and he wanted to know if I still wanted it. Yes I did. He shrugged and rang me up.

Getting home I popped in the DVD just to take a quick look at the film. It looked great. It actually looked wonderful and I let the film run for a couple of minutes…and discovered to my delight the film did have English subtitles, tiny ones on the print itself. Knowing that I would have to watch tis on the big TV in the living room I put it aside into the big screen pile and to some degree forgot about it…until I had a night where I could watch anything I wanted and wasn’t sure what I wanted to see, and then I found the DVD and my viewing choice was made.

When the film ran at the film festival Mark Walkow described the film as a movie about home decorating. And having seen the film twice now there is no way you can get away from it, that’s what it is. It’s a film about coming up something to decorate the Tian An Men Gate. In its way it’s very much like one of those home decorating shows but where if it goes wrong the decorators will be shot.

The film is set in 1949, it’s time for the Founding of the Republic ceremony. The leaders want something spectacular but also befitting the solemn ceremony. The job is turned over to a group of soldiers who have no idea what to do or how to approach it especially on the size and scale they need. Worse since the ceremony is not that far off they have only one shot at it, they will have to get it right the first time.

When I first saw the film, I liked it but I didn’t love it. It was a sweet film with some magical moments (the men on the roof looking out over the city). I suspected that the film was wonderful diversion that deserved to be seen by more than the minimal audience at the film festival. Afterward the film hung with me and at the end of the year it was on my list of films to search out.

Seeing the film again I liked it more. To be certain it isn’t a great film but it is a solid off the beaten path one. I mean would anyone in Hollywood ever think to make a film about a bunch of guys decorating the Lincoln Memorial? I think not. It’s a film that genuinely gets a couple extra points just for being different.

And despite getting those bonus points the film is really good. Remarkable it isn’t, entertaining it is. Its one of those films that solidly and expertly does what it does and then gets off. Best of all unlike many other bigger and flashier movies this is a film that will leave you feeling like you’ve actually seen a film.

Two and a half years on the film is still one that you should keep an eye out for.
Posted by Steve Kopian at February 13, 2013