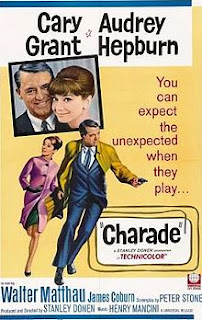 Stanley Donnen directed classic seems to have fallen into a kind of disfavor of late. I’m not sure why, actually I am since watching the film in early December I realized that the film is so damn slick the covering slipped off.

The plot of the film has Audrey Hepburn on a ski vacation. She is certain that something is up with her husband and she is contemplating divorce. Heading back to Paris she arrives home to find everything, everything gone from her apartment and no sign of her husband. A police inspector arrives to inform her that her husband has been found dead, having been tossed from a train. After the funeral her life becomes a whirlwind as she is informed by a government official that her husband, along with three other men, stole money from the government during the war. He warns her that they will be hunting her because they “know” she has the money. Complicating matters further is the arrival of the mysterious Cary Grant with whom she had fleetingly flirted with on her ski holiday. As time goes on the question becomes who can she trust?

Moving like the wind this is as close to a perfect a comedic thriller as you can get. You have memorable characters, romantic settings, some nasty deaths (which were graphic for the time) and some of the best dialog you’ll ever here. Everything is note perfect…

…which is the problem, its so perfect that it really isn’t all that real. This is the grand adventure we’d all like to have played exactly right with the result that not only can you see the gears going but you can largely guess what is going to happen next. Okay yes, you may not guess the details, like where the money is secreted, but you’ll see the arc.

Is that a bad thing?

In this case it is not. You have a great cast that includes, James Coburn, Walter Matheau and George Kennedy. You have some of the best dialog outside of the glory days of screwball comedy and you have Paris.

Seeing the film for the first time in a decade or more I realized that is possibly the last pinnacle of old Hollywood. What I mean by this it seems to be one of the last major American films that seemed to echo back to the golden age of Hollywood with Hollywood stars. After this films would continue to change to more real world, on location settings (which Charade has some of) and would be more real and heavily influenced by the British films that were flooding in. Additionally you started to get films like Bonnie and Clyde. While Hollywood would make similar films, none would be this good.

For that reason alone you should see the film—as if the fact it’s a damn fine film isn’t reason enough.

(And avoid The Trouble with Charlie the god awful remake)
Posted by Steve Kopian at February 24, 2013