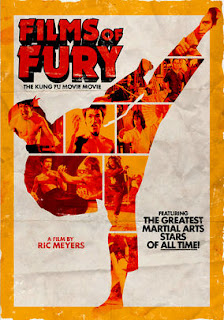 Ric Meyers scripted the film Films of Fury based upon his book of the same name. It's an 80 minute overview of the history of martial arts films in China and the United States and it's exactly the sort of thing that will have you running out to get a bunch of the films show cased in the film.

A breezy rapid fire history the film takes things from the early days of the genre, actually before it was a genre, and marches head long toward today. The film is narrated by an animated video store clerk who is telling a customer everything he wanted to know about martial arts movies from the black and white days to the films of the late 60's when the genre as we know it began to be formed, to the early 70's when Bruce Lee mania hit, through the 80's when Tsui Hark and John Woo changed things, on to Hollywood who stole and then was was stolen from on today's masters like Donnie Yen. It's everything you need to know to understand how things are related.

Full of great clips this is a film that had me taking notes and trying to figure out what I've seen, what I own and what I need to see. Watching the film I was constantly going "Saw that. Have that. Need that". In more than a couple of cases I realized I needed to see some of the films listed sooner than later. This is exactly the sort of film that I'd like to have around to show people what the history of martial arts is. 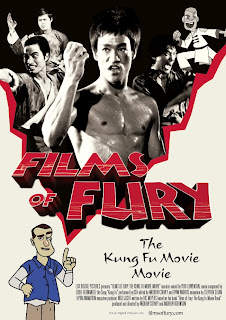 Actually what is here is good enough that I really wish it was more detailed. I say this because the film marches through things so quickly that a great deal is left by the wayside. As I write this I'm in the middle of reading Meyers book and there are so many stories and details that he covers that one really wishes that the film was at least twice as long as it's 80 minutes.

Thinking about it I really wish  that someone would come along and put together a real history of martial arts cinema that runs for more than 80 minutes. I have seen several hour long documentaries including the IFC Channels excellent hour long one from a few years ago and they always end just as they are getting started. I suspect that there is simply too much of a story to tell, but I'm sure if someone like Martin Scorsese could produce something we could get a real detailed history that honestly and truly did it all justice over several hours.

Until that day we'll just have to take pride in knowing that we have films like Films of Fury to at least shine a little light on the history of a frequently under appreciated or misunderstood genre.