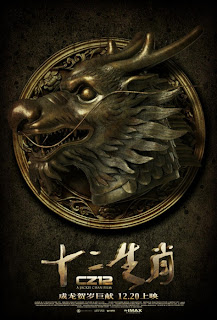 Sequel to Armour of God and Operation Condor is also a throw back to the Jackie Chan clown prince films of the 1980's and early 1990's.  It's also a real mess that will make you cry out for the questionable American films Jackie has starred in the last few years...on the other hand the film has moments and one hell of a great sequence toward the end of the film. Actually the film gets better as it goes on...

...but I'm getting ahead of myself.

Chines Zodiac has Jackie Chan (called JC in the film) working for billionaire Oliver Platt in order to get the missing Chinese Zodiac statue heads that  once were part of the Emperor's summer palace. Its a quest that will take Jackie to Paris and other locations around the world.

The film opens with the skateboard body suit  sequence that was in all of the trailers. Its a sequence that disappointingly just misses when seen its entirety. The problem with the sequence is that while it's sound in theory, the editing in the feature versionmakes it feel like its a series of bits sewn together instead of one long run down the mountain. From there the film spins out as Jackie tries to get his hands on the various heads.

The sequences that follow are, like the languages spoken in the film, all over the place. The sequences bounce from juvenile and silly (much of the jungle sequence) to mind blowing action (the fights in the storage facility) to overly talky (pick any of the talking sequences). The film doesn't have a consistent tone.

Blame the lack of consistent tone on the fact that the plot doesn't make any sense. The why's of where the animal heads are to be found makes little sense, as does Oliver Platt's plans. I mean a twist about dropping one of the heads into an active volcano is one of the biggest WTF moments of the last 100 years of film history.

I suspect that the film got side tracked somewhere in production by the decision to release the film in 3D. The choice to make the film in 3D is the only explanation for the whole jungle island set piece, which has things flying about and numerous chances for the type of deep focus that looks cool in 3D. Yea it will look good in 3D but it’s stupid and kills the film dead. Worse it’s also not funny.

I'm not going to lie for about an hour or so the film really isn't that good, and a couple of times it drifts into down right bad.  Many of the the sequences just don't work completely (the hedge row maze). Bits of it, the pirates in the jungle for example, are really bad.(Captain Jack Sparrow riffs, really?) then somewhere in the final half hour the film suddenly springs wonderfully marvelously to life.

Beginning with a smart ass fight with Jackie and a treasure hunter on couch the film suddenly begins to fire on all cylinders. The sequence is one of those that will probably be well remembered after the rest of the film is forgotten. The film then shifts and we get dual fights as Jackie begins to fight some of the guards in the facility while one of Jackie's aides takes on another woman. Its a two pronged fight that levels the facility and it is amazing. (And yea Jackie is beginning to show his age, but god damn he kicks serious ass in these two sequences- so much so it's worth seeing the film just for them)

The film ends with a sky diving sequence that, while isn't up to the storage facility fight, is pretty good. One of the surprising things in it isJackie’s condition at the end. Jackie was so badly broken, and I do mean broken look at the position of his leg and his blood red eyes, that I thought they were going to switch the tone of the film and have him die at the end. That doesn't happen but it felt like a possibility.

To be honest if you remove the Spy Next Door, this is probably the least of Jackie's headlining films in the last ten years. That said and serious flaws aside the film does have a couple of great late in the game sequences. So to be perfectly honest I do think it's worth seeing, though I will be hard pressed to suggest you do so on a big screen (especially on an IMAX screen) when the film hits theaters in the US later in the year.When the film hits cable or Netflix streaming I do think it's worth a look. I can't see paying 12 bucks or more a head to see it. I say this as a Jackie Chan fan, and while I do want to support him and his films, I want to support better films. 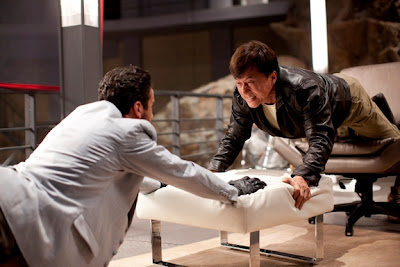