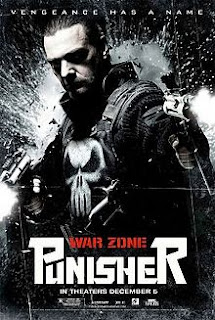 If you ask me what I remember about Punisher: War Zone it would be the opening shoot out at the mob dinner. A ugly bloody affair with blood and body parts going every which way it also contains some of the first “only in a comic book” images in the film. To me the one thing I remember most is the shot of Castle hanging upside down from the chandelier firing away as it turned and the bad guys rushed him. It was at that point I knew what the film was and I loved it for it.

Made as restart after the sequel to the Thomas Jane /John Travolta version stalled the film is much much closer to the comic than that earlier film. If you had been reading the comic for length of time you knew that the black body armor and darkness were part and parcel to what the character had become. The stories were little more than Frank castle going out and killing lots of bad guys. There was little in the way of character development, though there was some, mostly it was just action and mayhem across the various punisher titles (Punisher, War Zone, War Journal, plus numerous limited series and cross overs including one with Archie- no really it happened). They were fast reads but they were fun.

I’ve gotten into arguments about the film over the years. Somehow the poor reviews and poor box office have lodged in many people’s minds as making this film somehow less than it is. They argue that the film is not the comic, that it’s just mindless unrealistic violence, and that it makes no sense. If anyone had been reading the comic, they would have known that, the film is very much the comic come to life complete with unrealistic violence and little sense. To be fair the Punisher that appeared in the crossover stories is better written than the regular comic simply because you didn’t have to fill 36 comics a year, just 3 or 4 of the cross over.

The plot of War Zone has Frank Castle, the Punisher, taking out a large gathering of mafia people at a fancy party. Told by a cop who happens on the scene of something going down at the dock Castle heads there. Causing more mayhem Castle unknowingly kills an undercover agent and he drops a Mafioso into a glass grinding machine. The agent dies and his partner swears revenge. The Mafioso survives the time in the grinder and rechristens himself Jigsaw. The film then spins out as Castle has to deal with the fallout from his actions as he is hunted by the police and Jigsaw.

Bloody beyond belief it is.

I had been wondering why I hadn’t seen the film in a while until I stumbled on it on IFC recently. Sitting down with my dad for an evening’s entertainment I suddenly realized why no one was running it, it’s constant bloody violence. Anyone running it would do so late at night, and you can’t cut the violence down for a commercial station without shorting the film to about 15 minutes, especially if you did so for language.

I’m still kind of blown away that this was a Christmas film instead of a summer one.

I really liked the film when I first saw it when it came out and seeing it again recently I found that I liked it even more. If it’s possible it has improved with age. I think the over the top nature of it plays better in a post Kick Ass world. I think knowing that it was realistic but cartoony violence helped me except all of the perceived flaws of the film. I think it really hit me that the film was simply operating on another level. As I said I’ve always liked it, but I think I never realized how good and how much fun this movie is.

The best thing I can say is this is a grand old school exploitation film done up on a big scale.

If you love action go see this film.
Posted by Steve Kopian at February 20, 2013