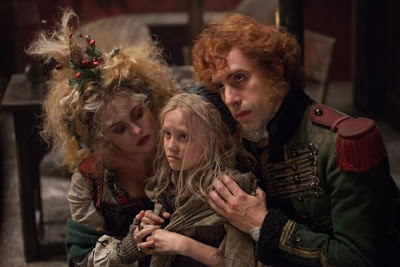 I was ranting at Randi earlier today after I saw Les Miserables. She was a mused and kept saying this is why she wanted there to be an Unseen podcast, my occasional rants. Apparently she found what I had to say about the film amusing.

I should say at the top I've seen the show twice. Once when the show opened on Broadway, the second time when I was dating Randi. That second performance was as perfect a a stage performance as I've ever seen (and I've seen hundreds of shows). I also can sing,not well, but I can sing most of the songs. I know the show.

For those who don't know the plot of the film follows Jean Valjean as he is released from jail but can't find work. He finds god when a priest shows him kindness. He then blows his parole and changes his life. When the some one is taken into custody on the belief that the person is him, he reveals himself, but flees to rescue the daughter of one of his workers. Years later he runs head long into his old nemesis on the barricades as he trying to rescue the man his daughter loves.

Yea it's soap opera, but when done right it's brilliant.

Here, it's only occasionally done right.

Where do I begin?

The performances are okay. Hughe Jackman is fine, Anne Hathoway will get her Oscar, Amanda Seyfried is fine, Helena Bonham Carter is a non entity, Sacha Baron Cohen  proves that he is one of the most under appreciated actors working... Surprisingly Russel Crowe isn't bad. He's not as bad as people make out. The bad one, the truly awful one is Eddie Redmayne. Vocally he's awful....

The real problem is that the film is poorly directed. Whoever made the decision to film the singing live effectively killed the film from ever having a chance to work... because of how the singing was done they reduced the film to close ups, they made it claustrophobic. Its tight streets and rooms. Nothing feels real, its all sets. The epic nature of the story, of the stage play is lost because the film focuses on single people or perhaps pairs.

Look at One Day More, this sequence which has several groups all singing at the same time on stage and builds to a crescendo show stopping moment in the theater, crashes and burns on film. You have a shot of Jackman singing, followed by Cohen and Bonham Carter, then Crowe, then Redmayne then the students... and back again. The singing of each part is in a vacuum. If you listen you can hear that each piece as if these clips were separate and distinct. It doesn't feel like it was really one moment in time in several places. Any emotion is stripped away and the sequence which  moves you to tears feels like it was put together by a baboon.

Later on the sequence of Bring Him Home, where Valjean asks God to spare Marius dies because it's all close up of a pacing Jackman. Jackman's vocal performance is fine, the trouble is the camera moments and the fact it's only Jackman from the waist up makes it Jackman thinking about nothing much instead of pleading with the creator to save the life of the boy his daughter loves.

I know the film is not the play, but the film shouldn't feel smaller and less epic than the play. Yes there are some grand epic moments, the opening, some of the crowd sequences, but mostly the film are these tiny rooms or single people on a huge canvas.  On stage you felt you were all over France, in the film, you largely feel you're on a soundstage in front of flats.

Worse because we are largely watching single people just singing and not doing the film seems static and stagnant. In the theater the show ran three hours twenty minutes and never felt long. here the two and a half hours feel like an eternity.

Yes the film does work occasionally. Master of the House, though clumsy is a joy because the camera and the characters move around. Anne Hathoway's solo kicks ass and takes names.  And some of the spectacle is glorious. Most amazingly the one thing that never ever worked for me with the show, the final song,here is rendered into a moment that reduced me to tears and made my voice crack when I was describing it to Randi. As the cast singsDo you hear the people sing...Jean Valjean walks into a a square with a monstrous barricade where all the world has come together and the dead have returned. Its a purely cinematic moment that soars to the heights the rest of film never approaches. It's so glorious I can understand how some audiences were giving the film standing ovations.

On the other hand how the hell this film had been picked or even considered the best of anything is completely beyond me. Oscar?God I hope not.
Posted by Steve Kopian at February 02, 2013