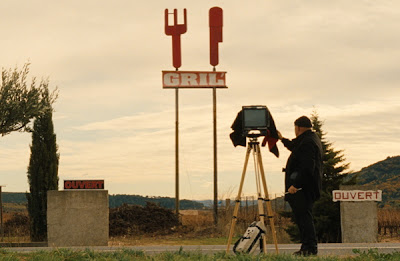 Raymond Depardon and Claudine Nougaret look back at Depardon's career as a filmmaker and photographer in a film that will amaze the hell out of you with it's images and mixture of image and music.

The conceit of the film is that Nougaret is in Depardon's basement going through his film cans while he's off traveling around France taking pictures. The film bounces between his footage and his photos as the pair explains what we are seeing. Following his career chronologically the film shows us what happen in Venezuela and Biafra during their civil wars, Prague during the uprising, his time following a French presidential candidate, his time in the Central African Republic, his time with rebels in Chad, his film on news reporters, and his various films on the French Criminal Justice system. We also get to see the meeting of Depardon and Nougaret several decades back.

The film is full of stunning images and marvelous sequences set to music, such as the second one in the film which follows Depardon trying to take a photo of a street. Moving from the sunny street to a road shrouded in fog with a lovely piece of music, the film suddenly grabs you by the throat and you're off traveling the world until the final sequence of clips from everywhere in rapid succession.

On a purely visual level this film MUST be seen on a big screen for fullest effect. there is something about seeing men crossing the desert in a sand storm,or people fighting in South America or even just the French country side on a large scale that just makes you realize what the power of the documentary image can be.

Equally stunning are some of the less visual moments, Nelson Mandela giving a moment of silence or  hearing a mercenary talk about the up coming fight that had to be fought only to next see his dead body to be carried from the field and his friends trying to locate his missing money and possessions or even hearing how the best way to win the presidency is simply not to say or do anything.

There is so much here that when it was done I wanted to ask them to run it again.

Yea I loved the film.

See this film when it runs this weekend at Rendez-vous with French Cinema. 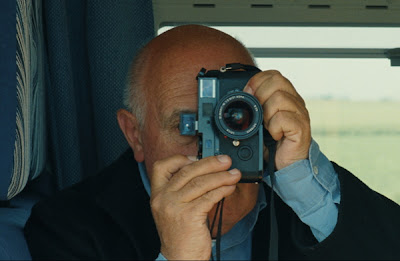