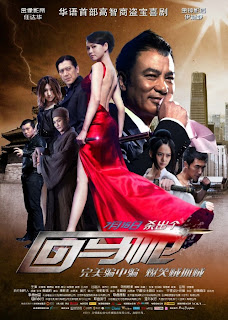 A small trifle that's kind of hard to classify- which you'll understand when you see it.

Simon Yam plays an art restorer who is needed to repair a stolen painting that was damaged when it was stolen. In order for the bad guys to get paid they need to have a perfect painting. At first Yam refuses but the bad guys won't be denied and they take steps to get their way.

Containing elements of historical wu xia epics, caper films, comedy and family drama (Yam and his daughter are strained in their relationships) I wouldn't know how to really classify the film. It's probably safest to say it s a comedic caper film. Though that isn't fully the case since it occasionally takes some odd turns with the split nature of Yam's daughter. To be honest I don't know how to describe it accurately except to say it's pretty good.

Watching the film I kind of completely understood why the film hasn't been touted really anywhere in English. I had the film on DVD for a while and I know I picked it up simply because Yam is in the film. The trouble is I had it so long that any discussions I might have had about the film, which is labeled completely in Chinese have long disappeared from my brain. Wanting to have some idea about what I was seeing I went on line and really only only found brief mentions of the film, at least in English. It seems most people seeing it aren't writing about it in English.

I really liked the film a great deal. Is it the be all and end all? Hell no but it's a nice little comedy caper. On the plus side I smiled like the dickens through a good portion of the film, but at the same time I know come years end the film will probably have gotten lost in the crush of films.

Definitely worth seeing if you run a cross it.
Posted by Steve Kopian at February 15, 2013