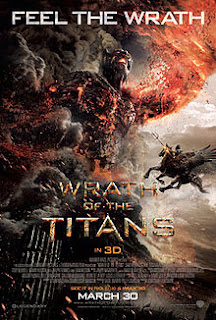 Much maligned follow up to the much maligned remake of Clash of the Titans is, in my humble opinion even better than the first film, which I love.

The film continues the story of Perseus who is forced to fight the forces of Hades who seeks to free Cronos who will destroy the world and the other gods.

Picking up several years after the first film , Perseus’s wife has died and he is raiding his son. When Zeus warns him of a coming conflict that will affect all of mankind Perseus shakes it off. It soon transpires that Hades and Ares are conspiring against Zeus and the other gods. They have made a deal with Cronos for immortality if they free him and give him Zeus’s power. Perseus is then shaken in to action in order to free his father and save mankind.

Big scale action film is better than the one that preceded it. Filmed in a less frantic style one can really enjoy the set pieces and wicked monsters instead of being battered around. This is important since the monsters are cool and the action sequences are gripping.

I like that the film actually builds on the earlier film, deepening the relationships of the characters and taking them somewhere.

I’m kind of at a loss to explain how some people I know really don’t like the film. Its not high art but rather a simple bone crushing action fantasy.

When I finished the film on DVD I was ready to dive back in.

Definitely recommended- especially with a big bowl of popcorn
Posted by Steve Kopian at February 18, 2013