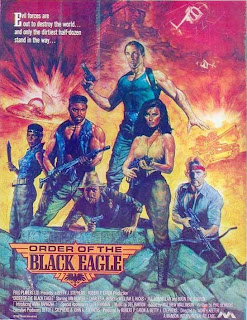 The two Duncan Jax films are a bit of anomaly, in that they were semi-independently produced by producers with some money who hooked up with Earl Ormsby. Ormsby was a rich southern man who wanted to make movies so he set up his own studio in North Carolina and made movies which played the drive in circuits through the south of the US. His movies were of mixed quality, but they were for the most part wll produced and fun. Ormsby is possibly best known as owning the tank where James Cameron shot The Abyss.


The company name on the films is Polo Players, I haven’t investigated them beyond that but they appear to not done much beyond these films.


The Jax films follow Duncan Jax a secret agent/trouble shooter on the order of James Bond crossed with say Indiana Jones. He’s a man of action who can handle anything. When we first meet Jax in Unmasking The Idol he is on mission in a high rise. Wearing a black suit and chain mail hood he is on the hunt for his target. After killing his prey he leaps out a window into a swimming pool and then manages to escape via a trick or two and a helium balloon.

For the most part the Jax films would have been consigned to oblivion except that the films have shown up on Netflix and Amazon streaming services. I had never heard of them until filmmaker Ted Geohagen tweeted about getting the second film, Order of the Black Eagle as a recommended title on Netflix. The description of the film, which mentioned Jax’s tank driving baboon aide intrigued him... and me.

And yes you read that right Jax has a real live baboon who is his sidekick…and he wears a tux.


If you’re like me you’re rushing over to Neflix or Amazon to find the films – and right you should, these are amusing little films and I recommend them.

At this point I’m going to say a few words on each of the film.

Unmasking thee Idol (1986)
Seemingly more serious of the two Jax films has Jax  going after the gold  that is going to be used by terrorists to buy nuclear weapons.

The film is full of set pieces, including the the afore mentioned opening with the steel mask and the helium balloons.

While I really enjoyed the film I found that compared to some of the craziness of the Black Eagle, this film was kind of forgettable.  It's not a bad film, rather it's just that the first film that the film that follows is more fun. Actually the film kind of suffers from being a tad  too much like Indiana Jones and James Bond mushed together.

Reservations aside I would gladly sit down with a bowl of popcorn and watch it all over again.

Order of the Black Eagle (1987)
Secret agent Duncan Jax must stop a bunch of neo-Nazis from awakening Hitler from his cryogenic sleep and making a proton beam death ray. Teamed with a beautiful blond he must infiltrate the Nazi's and stop their nefarious plans. 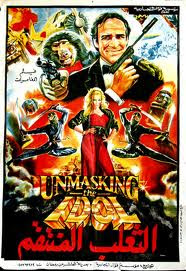 This sequel to the previous years Unmasking the Idol is actually pretty good assuming you realize the film is tongue in cheek.(At least I hope it is)

Kind of almost possibly good the film actually plays better in that realm known as a party film For my money the real way to see this film would be with an audience of party minded people.


The film oddly has a decent budget and good actors. The script isn't bad, but would have worked better if it was paced a bit faster.

It's bloodlessly gory with decapitations, withering limbs and other carnage portrayed in offensively

Are the films great? No. But they are a hell of a lot of fun. They manage to be both send ups and homages to the spy/action genre. They are well produced and well acted little films that are entertaining as all hell, so long as you click onto their wavelength. Ideally the films should be viewed by a bunch of friends with snacks and drinks .

Definitely worth tracking down- hell I’m looking to get them on DVD
Posted by Steve Kopian at February 21, 2013