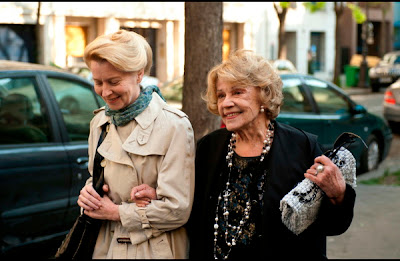 Jeanne Moreau is a bitch on wheels in the charming but prickly and not wholly successful A Lady in Paris.

The plot of the film has Anne Rand (that's the character's name) leaving her home in Estonia to go to Paris to take care or Frida, an Estonian ex-pat who has been living in France for decades. She has been hired by Stephane to watch over Frida who is bitchy and depressed and recently tried to swallow the entire medicine cabinet. Frida instantly starts bullying Anne and a complex game begins to be played by the women who kind of form an uneasy alliance.

I like this film but I'm still mixed about it since ultimately it failed to amount to much for me. Don't get me wrong, the film has some great performances and Paris has rarely looked this lovely but for a couple of reasons the film doesn't fully work.


The first problem is Anne is dumped into the situation after being told almost nothing. Frida is a bitch and there is a reference to her trying to kill herself but that's it, with the result that she stumbles and bumbles through several breakfasts before anyone tells her what she's really doing wrong.

The second problem is there seems to be this whole vast expanse of backstory for most of the characters that is never explained. Frida's misdeeds are revelaed, but what of Anne's story? We can sense more to her than we're told, but she never says a damn thing. As for Stephane we get pieces but not enough, and where did the attraction between him and Anne that one can sense in the final couple of scenes come from? I don't know.

The third problem is that the film hits a bit too many cliched points,for example the arranged tea is obviously going to go south, so why even have it? there are a couple of other moments that every film like this hits so things are not all that surprising.

Lastly the film kind of stops. Its heading in one direction, switches back and then...it stops...and? My over riding feeling when the film was done was...AND?  And you're telling me this story why? I was fine following along, but when the film stopped I still was waiting for a reason to have been told this story.

I do like the film, but I don't know what I was asked to listen to this story.

Playing over the weekend at Lincoln Center, I believe all screenings maybe sold out and you may have to wait on a stand by line. 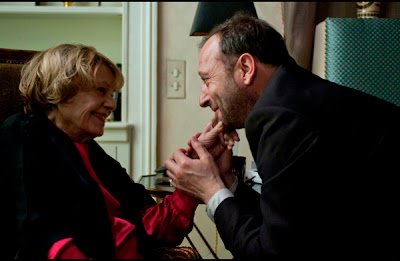