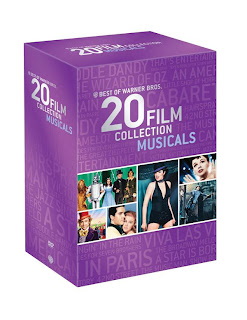 This is going to be one of my rambling reviews. I'm gonna have to ask your forgiveness right up front since the task of reviewing this box set of DVDs  in the amount of time I had (see below) was kind of beyond my capabilities, It's not that there is anything wrong with the set,there is not,it's just that there is simply too much to it. I mean I really thought I was going to dive in and watch it all.. nope. The damn thing bested me...in a good way.

Anyway, here is my attempt at reviewing The Best of Warner Brothers 20 Film Collection: Musicals.

There's a story here that I'm not sure I should tell but I'm going to tell it anyway.

Just over a week ago, just as I was sending off the names of the winners of our Cabaret Blu-ray Giveaway I was asked if I would be interested in looking at and  reviewing the 20 film collection of musicals that Warners was putting out in connection with the 90th anniversary of the studio.

Interested? With the wonderful history of Warners musicals who wouldn't be interested in getting a chance to go through such a wonderful treasure.

The problem, which I only found out after I agreed to do the review, was I had only a week to do it.

Okay, now those of you who know me know that I can do 20 movies standing on my head. Even allowing for many of these films to run around three hours I figured I could probably watch the films and then bang out the review in a couple of days. Unfortunately this set is full of so many goodies you simply can't just watch the movies, you have to watch the movies and then listen to the commentaries, and watch the additional shorts and documentaries and pausing of course play some of the bits over  4 or 5 times in a row because that's what you do when you hit a favorite song or dance sequence. It's simply physically not possible to watch all of the these films and all of the extras and turn in a review in a short time... I know because, damn it, I tried I really did...

All kidding aside this is a killer set. It's absolutely incredible. While I haven't watched every thing on every disc, I made a game effort to at least  watch the films and nibble at everything else. Simply put this set is so much cooler than I had hoped. My feeling is that unless you have most of these films already it behooves you rush out and get the set because basically, even at full price you're getting the films at like five bucks each. Go buy it now.

That's the short review the long one starts right about now---

Okay lets get the bad stuff out of the way- this set is made up of prior releases. If you are a musical fan odds are you have some of these films ( I for example have 42nd Street, The Great Ziegfeld,Yankee Doodle Dandy, and Willy Wonka). but as I said that is no reason not to pick this set up because there are 20 movies in the set and unless you are a musical nut you don't have them all.

The other possible problem with the set is that where the films are out in multiple disc editions the DVDs here are only movie DVDs. Which means the Jazz Singer, The Wizard of Oz, Yankee Doodle Dandy, American in Paris, Singing in the Rain and A Star is Born do not have all of the extras that came on their super special editions..On the other hand, if we're honest, in most cases you never were going to watch most of that stuff a second time, if at all (You really were going to go through the Jazz Singer's 4 hours of Vitaphone shorts more than once?). On the other hand the discs are filled with  good stuff  such as the commentary tracks that go with the films are here that you have enough to keep you busy. (though Show Boat,  A Star is Born and That's Entertainment don't have anything extra except the trailers)

I also need to warn you that the versions in the set are not the most recent editions,films such as Cabaret which just got a killer Blu-ray release or recently released directors cut of Little Shop of Horrors.  I know some of you may quibble, but odds are if you were that big a fan you probably already own those special editions- which brings me back to the statement  two paragraphs  back: You shouldn't put off picking up this set just because you have one or two of the films, simply put there is just too much good stuff here not to have it in your collection.

I know that isn't really a review it's more an advertisement but stick with me I'm just getting started.

When I started in with the set went to the first film, The Jazz Singer. I've never been a huge fan of the film, but then I started to really watch the film, I started to listen to the commentary track and I suddenly began to not only understand the film and it's place in film history, but what went on when the film was made.  Sure I could chuckle at the footage of New York's crowded Lower East side being intercut with huge Hollywood sets of what it's like inside the tenements, but at the same time I got a real sense of the culture that the film came out of. I understood why the film was a game changer despite there having been other sound films. It like many of the other films was an eye opener- even for these jaded eyes.

It was a kind of musical overload but I soldiered on over a few long nights. (Though to be honest having recently seen several of the films on Turner Classics I only watched the extras)

What I liked about having all of these films together was that you not only get a sense of what a great collection of films that Warners turned out, but at the same time you see how musicals have evolved literally from the start (not The Jazz Singer, but short A Plantation Act with Jolson which was such a hit it got Jolson the part in The Jazz Singer) to the present in Hairspray. You really get sense of how the medium evolved and how filmmakers struggled with keeping songs with in the context of  the story. Interestingly I find it amusing that the first musical uses actual performances of songs in context something that the art form drifted away from, only to return to in Cabaret.

For me the joy of the set was that I got to see a couple of films I've never seen before. Until I had this set in my possession I never saw a frame of the Judy Garland Star is Born, I never saw much of Show Boat, Seven Brides nor Viva Las Vegas. I also finally saw the Oscar winning Broadway Melody, which I found as I discussed the set with several people, no one in this day and age seems to have seen. (Actually I'm going to try and steer people towards it so some time in a few weeks I'm going to do a weekend of Broadway Melody and The Great Ziegfeld).

You'll forgive me for not doing full reviews of each film, there simply are too many to review and not feel repetitive, many of the films are rightly considered classics after all. I'm also not going into minute detail about the technical merits of the films, I don't do that, but for my money they all look great.

I will say that while there are no bad films in the bunch I didn't care for a few films on their own terms. Show Boat is a bit too showy and old school for my tastes, especially when compared to An American in Paris which came out the same year. Seven Brides never was a musical I liked much. It's fine for what it is but I had trouble going in, though I found I listened to the commentarymore than the film's sound track,which is cool.  I love the musical Camelot, but finally seeing it widescreen after decades of pan and scan I can honestly say that it still has too many close ups.  I've also never been a fan of That's Entertainment, I'd rather just see the whole movies the sequences come from. Those are not critical comments just my take on the films

For all the quibbles this is a really cool set and it's worth your money and your time to get it and go through it. Frankly it's so good that I'm going to go back through the set again soon simply to pick up the things I may have missed or rushed past to begin with. If you like musicals, do yourself a favor and pick this up.

To purchase the set or to get more info follow this link to the Warner Brothers site.
Posted by Steve Kopian at February 18, 2013