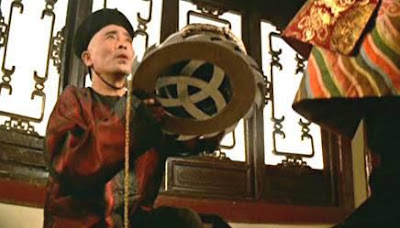 First of  two films, but really there several others linked by the weapon,  that sparked the imaginations removing the heads of various good and and bad guys with a Frisbee.

The plot of the film has the emperor seeking to kill several lords who spoke on behalf of the people. Wanting to please the emperor one of his advisers comes up with the title weapon which the emperor will use to kill his enemies. When one of his elite squad begins to see the error of emperors orders he is forced to flee,but is hunted down by the emperors guillotine squad.

A good solid little film is remarkable for more the guillotine and not so much for the plot. The Frisbee like weapon is something that is thrown through the air so as to lands over the head of a victim. The attached chain is pulled and the victim is decapitated. Its a really cool device that one it's own terms sparked the numerous sequels.

The plot line which has some action, but not as much as many other martial arts films is pretty good. It concerns our hero first welcoming the emperor's attention and then running from it. It also has the various characters turning on each other in an effort to remain alive. Its a solid little story but not really remarkable and had the guillotine not been so cool the film probably would have gotten lost.

Definitely worth seeing on it's own terms and because of historical significance.

(Come back later today for a look at this films direct sequel)
Posted by Steve Kopian at February 16, 2013