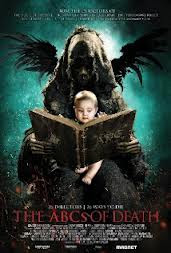 26 letters of the alphabet

The filmmakers were each given a letter and complete freedom. Some of them took it and pushed the envelope...some took it and crashed and burned.

The short version of the review is that this film is wildly uneven, way too long film that has some really great and classic bits, a couple of shitty pieces, pushes buttons and is probably best seen with a tanked up midnight audience. Its a film with most bits being clever but misstepping on some level but with probably only three or four complete misses and the same number of truly great (as in all time classic- as in you'll be talking about them for years) pieces.

For my money the idea was brilliant. get some of the best and most out there filmmakers working today and give them a letter. The problem is that not all of them can handle the pacing of a short film with Ti West's misfire running a couple of ill spent minutes and a few of the others going on way too long. While there are some real high points and some low points most bits just miss being much more than a gag.

The films are arranged alphabetically and while I won't give away what the plots or words are (the films are too short to ruin) I will say that I loved D, F and Q. I really disliked G,H,K, M and U. I do have to add that L is one of the best films I've seen this year and probably one of the most disturbing things I've seen in a very long while (maybe ever) and while the denouncement of P is probably similarly disturbing, it's long rambling nature makes it more boring than anything else.

While I like the notion that we're only a couple of minutes away from the next thing, I loathe that too many of the films made me want to just jump to the end to see the ending and what the letter stands for. I think the problem is that many of the directors formulated their short film not as films, rather as jokes with a punchline and once you realize that there isn’t a story but a gag, you just want to see the outcome.

If I’m coming across as disliking the film, I’m sorry, I don't dislike it, I'm simply, in retrospect after a couple of viewings, frustrated. It’s simply that the difference between the five or so truly great and classic films and the rest is so great that one can’t help but feel disappointed after coming down from such a glorious highs. In a weird way the problem with the film is not that all the other pieces aren’t good, it’s simply that they don’t live up to the highs which counter-balance everything else.

I would like to congratulate the producers for making a film that is damn near impossible to review. Because the pieces are so short it’s next to impossible to talk about them without wrecking their delicate structure or sucking the life and surprise out of them. Unless you want to be a jerk you can’t go into detail about the films since even a sentence could ruin some of them. Equally difficult is the fact the film has so many pieces that you can’t discuss them all. I know some fans and critics have done so but short of doing a mega piece on the film I can’t see the point of doing so. On the other hand at some point down the road I’d really like to really pull the film apart and discuss it in detail- but once the film has been out and people really have a chance to see it without there being spoilers.

Is the ABC’s of Death worth seeing? Oh hell yea. Assuming you know what you are getting, 26 short films about 26 ways to die, you’re golden, especially if you don’t mind the blood, sex and body parts I recommend the film, preferably with a group of friends or a rowdy audience.
Posted by Steve Kopian at February 25, 2013