Return of the One Armed Swordsman (1969) Celebrating Chinese New Year! 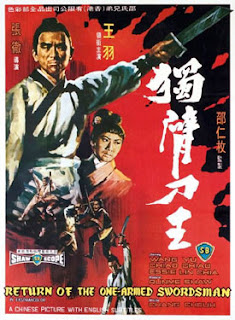 Fang Gang is back and things are bloodier than ever.

Told by the Black and White knights that he must join a contest to find the king of the blades, Fang refuses saying is a farmer now. He manages to drive off the knights when they come to take him, but he finds he is on a collision course with the evil Kings of the Blade when disciples of kidnapped masters come looking for his help. He refuses but he pursued to help after his wife is kidnapped...by the good guys.

If you like non stop action this film is for you. Where the first film was a largely character driven film, this is just pretty much non stop action as the Kings of the Blades (eight masters with various styles and weird weapons) collide with the army of  good guys lead by Fang.  It doesn't make a lick of sense and more people die than in all of the two World Wars combined but it's damn entertaining.

While I do like the film, I do think that at a certain point the film becomes over kill. There is a point about 85 minutes in when the good guys win and everyone heads home, the trouble is one the bad guys is still around and he mounts an assault on the good guys that leaves even more people dead and dying. While the sequence doesn't really add anything, it does allow for a long action set piece part of which takes place around a stream and waterwheel. Its the whole feeling of overkill that keeps the film from being a perfect martial arts film for me.

Despite the over kill it is damn close to perfect and is highly recommended to any action film fan,
Posted by Steve Kopian at February 09, 2013