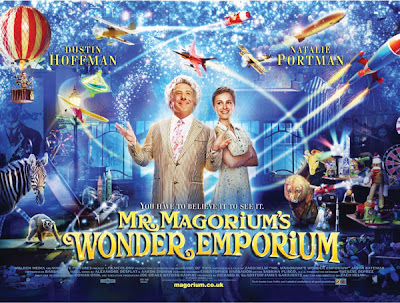 Mr Magorium who runs a magical toy store, decides that its time to go. He long ago bought enough shoes to last the rest of his life and now he's on the last pair. As he prepares to go he tells Molly Mahoney, his store manager of his plans and that he is leaving her the store. She's not ready for him to leave since she feels that she should be doing something else, probably her music...

Yea well, I'm a kid at heart and nothing that happens in this movie seems out of the ordinary, stuffed animals move, bouncing balls try to escape and slinkies are occasionally afraid to walk down stairs. Sue me. Filled with aphorisms and wisdom and more than a touch of silliness this is a movie thats going to annoy a great number of people and please others to no end. I'm one of those pleased. There are such moments of magic and wonder that are rare these days in film. Helping to no end is some honest to god CGI and special effects that are truly special. I was touched very deeply. Extremely well written, this has some fantastic dialog, and more than a few magical sequences. I wanted to keep writing down all of the quips and such because there are some really nice things to quote.

Not really perfect, the film suffers from a couple of Hollywood injections. The score is serviceable but no better than a thousand other Hollywood scores. Its does what it does, but it never soars or disappears into the background enough. Indeed the weakness of the score is evident when, in one of the great sequences, Cat Stevens Don't Be Shy (from Harold and Maude) is used to stunning effect. Nothing in the score matches that imported piece of music. The film also was put together by a committee of some sort.Sequences have different feels to them as if different people either directed them or put them together, its not something I can easily explain rather its that certain scenes are filled with genuine magic that matches what seems to be in the script while other scenes play out as if they are just linking pieces together, there is no, or considerably less magic (its the type of thing I'd have to show you while it was going on). Any of the flaws, even in combination, are far from fatal however they do make the difference between a great film that everyone can enjoy, and a good one that less people will click into.

Oddly I don't think this is a kids film. Sure its about a toy store but the themes it deals with, finding oneself, the loss or retention of magic as we grow up, our place in the world and the un-oblique discussion of death and the life lived will all be lost on a young audience. This is not a children's film as such, rather its an adult film that looks like a kids movie. I'm sure kids will love it and the neat toys and sense of wonder, but its the adults, those still struggling with retaining the magic and not growing old while having a life that is lived, that will be moved and touched.

I was moved, my red eyes and overly sniffly nose will attest to that. Your mileage may vary. Mine will be once more around the block and maybe into the ball room (There just has to be away to dodge that really big ball)
Posted by Steve Kopian at February 26, 2013