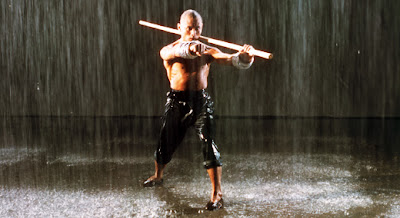 The film that put Gordon Liu on the map is a classic of martial arts cinema.(or is that a cliche?)

The film is the story of a student who is among the rebels fighting the Manchu overlords. When the group is found out he flees to the Shaolin temple where he undergoes rigorous training before leaving to once more continue his fight.

This is the film that will go down as the grand daddy of all martial arts training films. Sure there had been other films where students trained with crazy methods, but here it all came together into a grand whole that captured the imagination of everyone who has watched the film in the last 34 years.  We get carrying water with knives on the arms, banging heads into sandbags and various martial arts sequences. The whole center section of the film has been riffed on so many times that watching the film it doesn't always seem special but it is, this is where all those sequences came from.

Unfortunately outside of the center section of the Shaolin training the film isn't all that special. The story of rebels fighting for their freedom has been done better in any number of other places. I'm not completely blaming the filmmakers since they focused so much attention on the training sequences that something had to suffer and the opening and ending of the film does by comparison.  Does this mean it's a bad film, hell no, it just means that for my money the film just misses being truly great with the films pieces out weighing the whole.

This is one of the films that is a must see, not only because when it works its incredible, but also because the film is historically important.