An appreciation of Balls Out (aka Intramural) (2014) 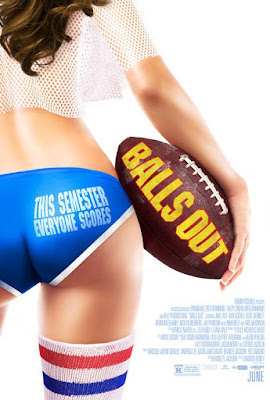 If you know me I have been talking about BALLS OUT for the past year. I saw the film last year when it played at Tribeca as part of their Midnight section. It was a film I never expected to see to the end much less like.

Way back in April 2014 it was Easter Sunday morning and Tribeca was into it's first weekend. The fact it was Easter made no difference to the festival which was screening films for critics at 9am and the public somewhere around 3pm.  There was a movie around 945 or so I wanted to see but I figured I'd get in early and see what was then called INTRAMURAL before wandering into the film I wanted to see. Because it was Easter there was almost no one in the place, but even on a good day some movies don't have many people into it.

The lights dimmed and the film started and it wasn't long I realized my carefully crafted plans for the day were blown to hell and I was staying, like the handful of other people, all the way to the end.

BALLS OUT is a fall down funny spoof of every sports film ever made done in the style of a 1970's or 1980's low budget comedies like the ones that helped found Troma. Think SQUEEZE PLAY, BAD NEWS BEARS, SLAPSHOT,  or the original LONGEST YARD. Add in every sports cliche you can think of including crazy announcers and  Win one for the Gipper speeches and then spin it in expected ways and you kind of have what the film is.

The plot of the film has a bunch of fifth year college seniors getting their once mighty intramural football team back together. They want to do one more thing that doesn't mean anything before they are forced to go out into the real world.

I don't want to spoil the jokes but they are funny, clever, vulgar, funny and really funny. Its a seemingly low brow comedy that's way more intelligent then you'd ever expect. Trust me there is great intelligence here and the jokes work on multiple levels.

How good is it?  I ended up staying to the very last credit. I loved this film. And yes it is literally fall down funny- the seats at the Bow Tie Cinema I was in had arm rests that lift up so I was sitting across a couple of seats like it was a couch- and when one of the games happened I was laughing so hard I fell over onto the floor.

This was one of my best films from 2014. More importantly it was a film I've talked about almost non-stop since I saw it.

A must see for anyone who likes to laugh especially those who like  pitch forward and crash to the floor spilling their drinks from laughing so hard.

The film opens Friday in theaters and on VOD and once you see it your living room from now until you die. Trust me this is one of those film you're destined to watch every time it's on TV.