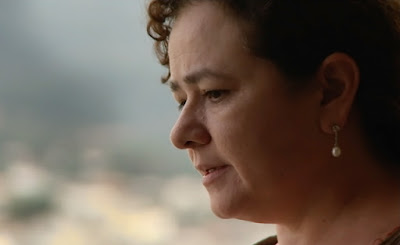 Portrait of Guatemala's first female Attorney General Claudia Paz y Paz who took to her post like a rabid dog with tunnel vision and started to actually solve crimes and put bad guys away. She started to break the corruption of her country. However she began to run into problems when she started going after the powerful military elite for war crimes and genocide.

Pazy Paz is a woman who gave a damn and sought to bring real change. She was the first person in power many people had ever seen who would actaully talk to them and try to help. On her watch murders went from an under 5% solve rate to over 30%.. She promoted honest people and pushed aside the corrupt. The film is a good portrait about how one person really can make a difference.

My problem with the film is after about 25 or 30 minutes the film begins to stall down.. The film seems to be a collection of similar events repeated. There isn't anything new to drive the film forward.  Even the testimony in the genocide trial isn't particularly "exciting" (a poor choice of words, sorry). While the verdict and its aftermath bring more than their share of tension the film then glides to a kind of foregone conclusion.

I admire the woman but I don't really care for the film about her.

The film plays on June 16th and 18th at the Human Rights Watch FIlm festival in New York. For more information on the film and tickets go to the films festival web page
Posted by Steve Kopian at June 11, 2015