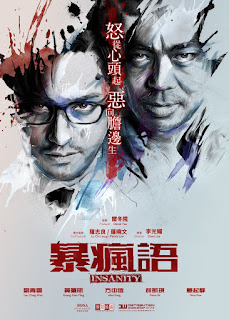 I liked the mood of this HK psychological thriller from the very beginning, a desperate & disturbed schizophrenic played by veteran actor Lau Ching-Wan abuses his wife physically & verbally until acts of desperation and stupidity causes her to take an unwilling leap to the death. While Lau's character gets off scott-free as the courts denounce the case as death by insanity, Lau gets shipped off to a psychiatric hospital where Dr Chow will be his so called saviour in curing our schizophrenic main lead. Little would we know that Dr Chow would be the star of this show as his past dealings will show why he became a healer in the first place. Who is the patient and who is the Dr of Psychiatry here? Both of our lead protagonists or antagonists whichever way you decide to lump them into, face a "mental" hurdle that many in our society face - that mental health issues often go untreated and undiagnosed. This doesn't seem exactly the case here as the act of treating is certainly recognized but twists and turns in the story will lead this to another type of fate. I liked how the story emphasized mental health treatment and once exhibiting good habits from the treatments, a chance to blend back into the community is offered but other factors from past experiences such as the mother in law will make there presence known. It almost seemed like this movie could of morphed into the horror realm if given a few more traits. What I liked about the film mainly centered around the performance by Lau Ching-Wan as he portrayed the disturbing character of Fan Kwok Sang. I would have never pictured Lau Ching-Wan playing such a bastard but recovering role because of the characters that he has portrayed in the past. I very much liked the cheap thrills and scares from the film involving the distraught mother in law. It really did amp up the tension in the scenes. The film often invokes anger,confusion, & suspense which is mostly dictated by the obtrusive instrumental sounds designed to race your thoughts. The mental flashback scenes that one might get when under the influence of narcotics added anxiety and strain in the membrane! If I was allowed to be picky about the film, the actor that played Dr. Chow seemed to be too stiff & boyish and not enough of the maniacal for the role to my liking. I'm still not sure what to think about the film as the plot of the story is so far fetched but I'm not going to lie, I surely did find it entertaining & suspenseful!