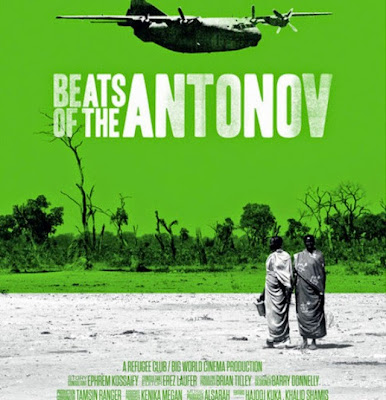 The  laughter is always there.
People laugh despite the catastrophe because they realize they are not hurt
Laughter is a new birth.

In the Nuba Mountain and Blue Nile regions of southern Sudan the various tribes are fractured by a war brought on by those in the North seeking to commit a genocide on those it deems not Arab enough. There is constant bombing and various rebel groups come and go. Through it all there is music- the music of the oppressed people who make their own instruments and sing and dance.

Imperfect but frequently soaring look at life during war time and life refusing to give up. A fine example of where there is life there is hope, this film shows you what a human being can do.n The film shows us how music is the life blood of the people and how it's democracy, most of the songs are either made up on the spot or simply made up by the performers to express their feelings.

When the music is playing this film is truly amazing.

The problem with the film is that in order to have the music mean something they have to put the political situation with in Sudan into play and there is a point in the last half hour where it begins to repeat itself. We've heard the explanations a couple of times before and continuing to go over it kind of is gilding the lily. I kind of took a half step back because the film was going over the same ground a fourth time. I get that the people running Sudan argue they are Arabs even though they are not. I understand that they are using divide and conquer techniques that if applied to themselves would get them killed. I got it the first time. I don't need it repeated.

On the other hand once we get back to the music and once we see the people trying to go on the film takes flight again. I love the music in this film. I love how it makes the film seem alive and dancing across the screen.

This is a wonderful film that needs to be seen. Not only will you come to understand what is happening in Sudan but you will see the ability of the human spirit to carry on.

For more information and tickets go here.
Posted by Steve Kopian at June 08, 2015