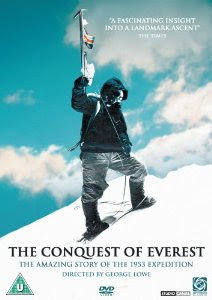 Excellent account of the climbing of Everest by Sir Edmund Hillary and Tenzing Norgay.

Beginning with the triumphant Hillary parading through Nepal at the same time Queen Elizabeth was being crowned the film then flashes back to the planning of the climb. The film then moves forward to show all aspects of the expedition including its triumph.

Say what you will this film is wonderful and still holds up after 60 plus years. The fact that the film still is as engaging as it is is due to several factors.

First the film is cut in such away that the film builds suspense. You actually fear for the climbers-despite being told at the outset they did it. I was watching the film for the maybe the tenth time recently and I just sat there wondering if this time things were going to go wrong.

Secondly the film focuses on more than the climbing. We get a great look at what it took to put the expedition together.We watch the men haul the supplies in, prepare themselves for the climb, interact with the guides and just try to survive.

Third, the film doesn't focus just on Hillary and Norgay. Yes they are featured but early on in the trip when the camps are being put together and the ground work is being done the film focuseson the men doing the work, and not on the men who finally climbed to the top. as the narrator says at one point it wasn't just just one man who made the trek, but a group and this film is the story of the group.

I really like this film a great deal.  It stands in shrp contrast to many recent similar films, including ones on these events, in that it really shows you the whole story,  Its not one aspect or one man.