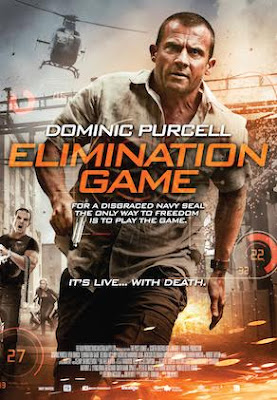 Back in 1983 a grubby little exploitation film called ESCAPE 2000 ( originally titled TURKEY SHOOT) was released to US theaters and made a small profit for the films US distributor Roger Corman. Set in the future the film had prisoners in wilderness camp being given a chance at freedom by allowing themselves to be hunted. If they made it to the end they were free- or so they were told. For reasons that have eluded me over the last 32 years the film has developed a small but very vocal following of film fans around the world (it's good but not that good).

Last year an Australian film company took the basic frame work of TURKEY SHOOT and it’s hunting of prisoners and remade it with Dominic Purcell as the story of a Navy Seal who is set up for a “failed” assassination and forced to play the game in order to get him out of the way in the most public way. The film was retailed THE ELIMINATION GAME for US release, though if they wanted to be truthful in advertising they should have just called it TURKEY.

The desire to write a long and very snarky review is strong, but it’s something that I’m going to resist doing since I can’t really see the point. I've suffered enough watching it and don't need to prolong the agony by writing an over long piece on a film best forgotten.

Outside of the performances of Dominic Purcell and a few other actors there isn’t much to recommend this film. Yes, some of the action is good, but some of it is also dreadful with assassins clearly shooting into the ground in front of them as we watch bullets hit near their supposed targets (ie. the battle in the shipping containers where the girl with two machine guns chases Purcell).

I’m not going to blame the anemic budget, I’ve seen too many cheap action films that made something of their material even if they had to resort to CGI to fill in the gaps and still showed enough skill and heart to make up for the short comings.

I’m also not going to blame the script which has some great plotting and solid verbal exchanges (I like Purcell sparing with his one-time friend turned one of his assassins.)

I’m going to blame the direction which is weak and static. People frequently are seen just standing against a background as if they aren’t in the same space in the scene. The action sequences are either amazing or laughable (The container fight or Purcell vs the female sword master and bow master). Things clunk along instead of flowing. There is a sense of plot details being left out. Worst of all the modulation of tone between the comedy and drama doesn’t exist. Serious things are funny for the wrong reason and jokes lay there dead. (Whats with the opening piece with the General being stripped by the girl? Am I laughing at it or with it?)As I said it’s not the script it’s the direction which is just awful.

I don't know what to say other than this film killed 90 minutes of my life I won't get back.

One of the least films of the year. While not one of the worst of the year- Dominick Purcell alone keeps it off the list and kind of watchable, it not worth your time.

The film hit theaters and VOD Friday.
Posted by Steve Kopian at June 24, 2015