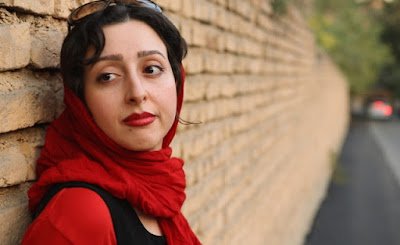 In 1979 the Iranian authorities banned female singers from appearing in public. Thirty years later composer and singer Sara Najafi decides that she wants to change things and she sets about trying to set up a concert where women will sing once more.

If I could only recommend the music in this film it would be enough for you me to tell you run out the door and get a ticket for this neat little film. However this just a great story with great people and so there is even more reason to go.

The film covers several years time as Najafi struggles to get permission to put the concert on. We're there for every step, even to the point we listen in when she goes in for meetings where the camera couldn't go. Because we're there every minute we get a real ride on the rollercoaster as things go up and down on the path to ...?. We feel it all because we've heard and seen everything that happens.

Director Ayat Najafi has managed tell the story in such away that everything remains balanced. yes the weighty issues of the right to speak or sing out is always there but it never deteriorates into a black and white good versus evil battle, The humanity of everyone on all sides its always intact so there is never an impersonal monster out there, its people trying to do what they feel is right.

This is a great film.It looks marvelous. The shots of the city with the music over them are real eye candy. Its a film that makes you want to go and visit faraway lands.

And of course there is the music which is wonderful...and on some level its understandable why people would want to prevent it from being performed since its very political. (And yes I'm looking to add some of it to my collection)

This is a super little film about the human spirit and the will not to give in but do what one feels one must. Its all the more timely considering events in world which are trying to impose a cultural darkness not only on women but everyone.

The film plays at Human Rights Watch June 13,14 and 18th. For more information go here.
( There will be a Q&A at each screening, however on the 13th there will also be a performance)
Posted by Steve Kopian at June 10, 2015