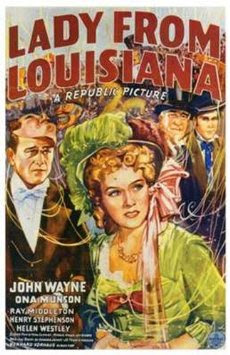 Lady from Louisiana is not a particularly good film. In its way it seems like a variation on the plot formula of Flame of the Barbary. It’s of interest primarily for where the film ends up .

The plot of the film has John Wayne joining the anti-Lottery league in New Orleans after the Civil War. It seems that the lottery is a grand scam that is paying great dividends for the racketeers behind it, who are using the profits for themselves and not the good work that they were intended for. They are also strong arming people into buying tickets whether they want to or not. Wayne falls in love with the daughter of the head of the racketeers a man who feigns respectability. His daughter while smitten with Wayne will not turn on her dad. When the Blackie, the second in command has his boss killed he steps in and woos the daughter away from Wayne. It all comes down to a chase in a hurricane and flood.

One of a handful of romantic dramas the Duke was saddled with after getting stardom in STAGECOACH, the film seems to be neither fish nor fowl. It’s a weird mix of genres all jumbled together. It an adequate time killer for much of its running time, the sort of thing you’d watch when nothing else was on-which is how I saw it. The interesting point in the film comes at the end, as the bad guys are brought to court a huge storm threatens the city. Just as Wayne’s lady love is about to testify against the bad guys lightning strikes the courthouse causing it to collapse. In the midst of the chaos Blackie grabs the girl and rides off into the storm with Wayne following. The brief sequences which ends the film is truly exciting and unlike any other film I’ve seen. In those brief end minutes the film really comes to life and I suspect that the film exists for those few minutes.

Is the film worth seeing? On a slow night yea. Personally I would try to come in on the second half and see how it all ends because the ending is worth taking the time to see.
Posted by Steve Kopian at June 18, 2015