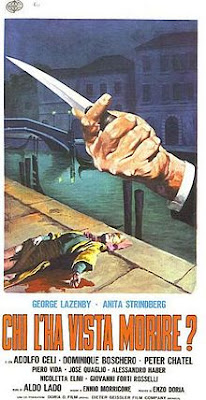 The film opens in France in 1968. A young girl who is sledding is bludgeoned to death by a veiled “woman” in a wooded area just off from the slope. Four years later another young girl is killed in Venice. Her parents, verging on divorce are brought together to investigate the killings-which increase in number as more and more people discover clues to the killer’s identity.

Aldo Lado‘s giallo seems to split audiences. Many people love the film and its moody depiction of mayhem in and around the canals of Venice, they see it as a a perfect example of the genre. Others have been bored silly by its slow pace and obtuse plotting. While I wouldn’t say that I think this is the pinnacle of giallo cinema I find it extremely entertaining and tense. The film has a real knack for setting a mood and keeping you on edge, even if you can kind of guess who is going to die next.

Fans of James Bond films should consider seeing the film because the hero of the film is George Lazenby, the one-time James Bond. Looking tall thin and slightly scraggly with long hair and moustache. It’s a role that is very different than many of the action film roles. As one semi-recent review of the film said its performance that makes you reconsider Lazenby’s entire career. Additionally of interest to Bond fans is the inclusion of Adolfo Celli as a friend of Lazenby and his family. Celli as you know was the villain in Thunderball.

The real selling point of the film is Venice. Hands down this is one of the great cinematic portraits of the city that I’ve seen. While it may not have the sweeping vistas of most films set in the city, it has a wonderful sense of the city as a place. This is the city as a lived in location, not a city of tourists and painters, but of people who live and breathe and die.

This is a great moody little thriller. (Fans of Nicholas Roeg’s DON”T LOOK NOW should take a look so they can ponder how much that later film lifted from this one)
Posted by Steve Kopian at June 20, 2015