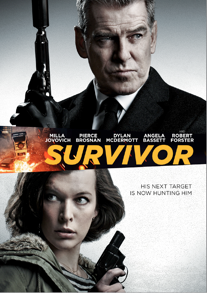 The film has a security expert played by Jovovich being transferred to the London American Embassy in order to help beef up security. When suspected terrorists are caught trying to use fake passports word comes down that everyone is to be super aware of people asking for visas. Unfortunately she stumbles on a plot to get people into the US.  The bad guys not wanting to have their cover blown ask one of their own, a man known as the Watchmaker (Brosnan) to remove the lose ends. A bombing at a restaurant kills some of the loose ends but Jovovich is left standing and is soon on the run from both Brosnan and her own people who think she may have had something to do with it.

If you're looking for a Jason Bourne sort of film, look elsewhere. This is a deliberately paced thriller that sets up characters and builds suspense for a solid 25 minutes before the first bomb goes off. This is a film that is very much interested in giving you characters you care about and reasons to hate the bad guys the film is in no way by the numbers.

Once the action comes and Jovovich becomes a hunted suspect the film kicks everything into high gear as she is chased all over London and twists and turns assure that there is more than a modicum of suspense.  Sitting in the living room on a rainy Saturday my dad and I took the Bluray of the film for a spin and found ourselves having a running commentary with the film and each other as we pondered what was going to happen next, who was a good guy, and how they don't make films like this any more.

I love the throw back nature where thrillers actually thrilled. I love how this film has characters you care about or feel you know something about. I love how director McTeigue populated the film with wonderful people in some of the smaller roles, Angela Bassett, Robert Forester and the always welcome Frances de la Tour who give their characters weight just by being in the frame. I know the lack of action for the first third of the film turned some people off but I think it made everything all the more exciting.

Is this a perfect film? Oh hell no. The plot strains credulity, but works with in the framework of the film. Additionally anyone who has ever been in NYC during New Year's Eve would know that the finale would never have been able to go down as it did- that said this is one hell of a popcorn film.

I (and my dad) really liked the film a great deal. 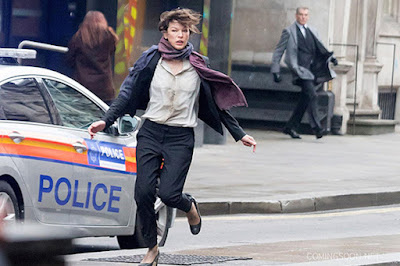