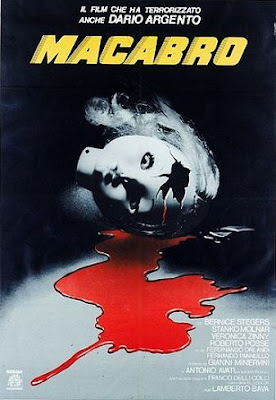 Lamberto Bava's first solo directing job is based in small part on a true story. How much is true is for you to decide.

The plot of the film has a woman going to meet her lover at a boarding house. When she refuses to talk to her daughter on the phone the daughter drowns her little brother and then informs the mother he died accidentally. Rushing to see her son with her lover driving the car they get into a car accident and the the lover is decapitated. A year later the woman is released from a mental hospital and goes to stay at the boarding house where she met her lover. She is watched over by the blind son of the boarding house owner.

Moody horror mixes with explosions of shocks to form a reasonably satisfying whole. The film isn't particularly graphic. In an interview where he discussed the film Bava said that he intentionally down played the gore and the sex simply because he didn't want it to become too lurid. Additionally everyone else was amping up the gore and he wanted things to stand out. While audiences of the day were disappointed with the lack of violence, I think the film plays better because of  it. The film somehow gains a timeless quality simply because it's no longer one of those gore films.

While the film's pacing is uneven, there are two sections where the film drags instead of building to a crescendo, the film remains one of the more watchable and ultimately enjoyable of the Italian horror films of the late 70's early 80's
Posted by Steve Kopian at June 21, 2015