I became aware of Daihachi Yoshida back in 2013 when NYAFF/Japan Cuts ran KIRISHIMA THING about a big man on campus who quits a sport team and disappears. The film tracks the effect that has on everyone else in the school. The film was a huge winner at the Japanese Oscars the year it was released. I admired the film more than I liked it. Though to be honest its one of those films that had an effect on me since two years on I still remember the film  when I'm hard pressed to remember other so called better NYAFF/Japan Cuts films.

This year NYAFF is doing a mini retrospective running 3 of the directors 5 films. Since Yoshida's first and last films are screening on Monday night I'm packaging reviews of all the films here (though to be fair Mondo looks to be doing longer reviews down the line) 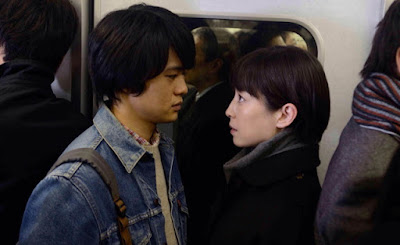 PALE MOON (2014)
The life of a house wife who is running an embezzlement scam in order to pay for the finer things in life and her affair with a younger man.

Good but very deliberately paced film is a kind of character study of our heroine. The performances are good and the drabness of the visuals match the life of the people we see. While I like the film it didn't really excite me on the other hand it didn't bore me. I was definitely interested in seeing how it came out but at the same time when it ended I felt I didn't need to see this.

If it clicks with you you'll love it otherwise its just going to be there.

Mondo will be tackling this in a fuller review 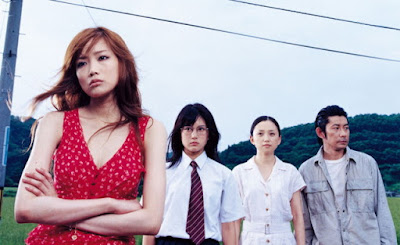 FUNUKE SHOW SOME LOVE YOU LOSERS (2007)
Yoshida's first film is a black as night but strangely upbeat comedy drama about three siblings who come together when their parents are run over by a truck when they attempt to save a kitten. All sorts of things result that are not normally the subjects for comedy.

Wickedly funny, but not for all tastes comedy is surprisingly light for a film filled with so much tragedy and dark doings. Hand it to Yoshida who manages to some how over due the nastiness just enough to make it palatable but somehow manages to keep it feeling real. Whatever happens the people on screen are real people and not cartoon.

This is a film I like a great deal, and had I not had tickets for something in Brooklyn the same night I would be sitting in the Walter Reade theater to see the director's Q&A. 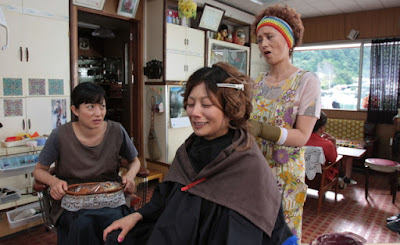 PERMANENT NOBARA(2010)
Returning home after her marriage goes south Naoko moves in with her mom who runs the titled beauty parlor where all they do is permanents. As she tries to get her life together she helps out her mom while the women gossip, the men stray from their women and everyone just tries to get by.

Very good but tonally uneven (the second half is much more serious than the first) this film is going to be loved by some people and hated by others (owing to to the move away from all out comedy). I was aware of the tonal shift going in  so it didn't bother me that much. For me the film is very much like the rhythms of life.

While this is not my favorite Yoshida film, that's probably FUNUKE, this is still a very good film that's worth your time.

The film is playing on the 4th of July

For tickets or more information on any of these three films go to the Film Society webpage here.
Posted by Steve Kopian at June 28, 2015