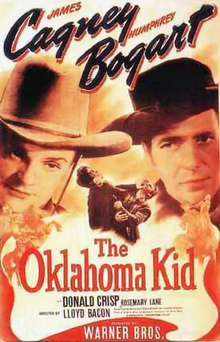 The thought of Jimmy Cagney in a western seems like a joke, but it’s not. Cagney made a handful of westerns, the first was during his heyday at Warners. According to Robert Osborne on TCM people thought it was a bad idea until they saw the film.

The plot of the film has Cagney playing the title character, a kind of loveable outlaw who is only dangerous when you draw on him. When bad guy Humphrey Bogart frames a law and order advocate in town, Cagney tries to free him. It seems that the advocate is Cagney’s dad and despite the “bad blood” Cagney still loves his old man. When His father is hung by a lynch mob, again whipped up by Bogart, Cagney begins a murderous course of revenge in order to get the men responsible.

Way better than you’d expect film has the right mix of humor (Cagney is a charmer) and thrills (Bogart is really bad and people die). There is a weight to the proceedings that many westerns of the period never really seem to have. It’s a feeling that is helped by the against typical setting for the two leads. Because we know them from their big city nastiness we can easily imagine the terrible things that they do to each other and other people. Additionally because neither Bogart nor Cagney are in a familiar situation we can’t be certain how they’ll react, anything becomes possible.

I really liked this film a great deal. Its far from the joke that I would have imagined.
Posted by Steve Kopian at June 16, 2015