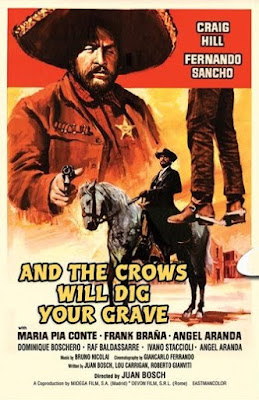 When Wells Fargo is fed up with a seemingly never ending series of robberies committed by Glen Kovacs they deputize a group of men to track him down.  One of the men buys Kovac's half brother, Dan Barker from a prison and uses him to track down the wanted man. Barker however has no intention in cooperating and escapes at the first opportunity.What follows is game of cat and mouse as the two men, and the other bounty hunters begin play a deadly game in order to track down Kovacs.

Solid little western is film where there is more than a little nastiness about. Lots of people die and even Sullivan, our nominal hero, gets shot and beaten up. What I like is that this is a film that once it starts goes straight on to the end, twisting and turning as it goes.Hell Kovacs doesn't show up until  almost the end of the film. While you can sort of guess the general ending there is no way to fully figure out where its going.

If there is any real flaw in the film it's that the pacing is a little slow. There are some times where things are a bit too slow. I wanted to say "get on with it", but at the same time some of the times are when some characters are being fleshed out, in particular some of the sequences with Susan.

Slow or no, the film is still enjoyable and definitely worth taking the time to see.

(The film is out on DVD from Wild East with a film called THE DIRTY FIFTEEN. That film is full of action but is saddled with about 900 characters who are all on screen at the same time making it hard to know who is who. The plot is also hopelessly convoluted.)