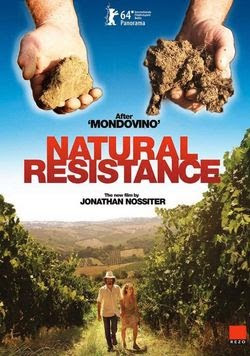 You have a single shot to see NATURAL RESISTANCE at Open Road at Lincoln Center and if you want a really good very thought provoking film that transcends it subject organic wine production, to become something so much more you have to go.

Nominally the film is about growing organic wine but the film spins off into other directions including a wonderful discussion of film restoration. The two subjects may sound unrelated but this film brings them together nicely.

I am not quite sure what to say about the film other than I need another shot to really appreciate it. The film is one of those films that when you watch it you get carried along,going where its going only to get to the end when you realize- wait a second I need to see that again. I mean you have wine, film, history and three or four other subjects banging around inside the film and by the time you realize what the film was doing you know you have to go back to really see how how it all ties together. Films like that rate very highly in my book because they become part of you and aren't "boom on to the next thing"

Definitely a must see if you want food for thought go see this Monday night. For tickets go to the film's festival page.
Posted by Steve Kopian at June 06, 2015