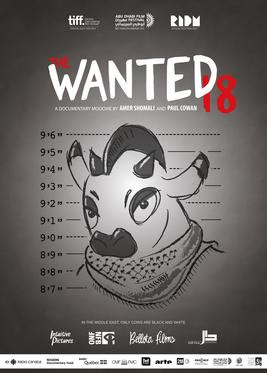 One of the great film finds of 2015, WANTED 18 is a film that will make you smile, make you think and make you feel. Nominally the story of the 18 cows who were bought by the village of Beit Sahour during the first Intifada. The idea was to start their own dairy so that Palestinians wouldn't have to rely on Israeli milk. The fact that the town had cows of their own bugged the Israelis so much that they ended up treating the hunt for the animals as if they were dangerous terrorists.

The film is told from two points of view. First director Amer Shomali talks about growing up in a Syrian refugee camp and being fascinated by the story of the Wanted 18 which he saw as a kind of real comic book. Through his portion of the film we see interviews with the real people involved. The film also shows us the events through the eyes of 4 of the 18 cows. These sections of the film are animated in a stop motion style and are frequently very funny. The two sections are intercut in order t reveal a greater truth,

If anyone needs to see the stupidity and futility of occupying a land that is not their own all one needs to do is see this film. WANTED 18 shows the ridiculousness of oppression not only by the Israelis, who are revealed to be fools by their own actions and over reactions but all occupiers or oppressors. While the film doesn't remove the fear, it does reveal the underlying silliness of it all. From the over reacting to trying to find the cows, to the curfews turning into BBQ'a, and day long arrests into parties, this film explains how an occupying force can really defeat their own cause.

This is a great film.Its funny and touching and will anger you (in the right way). If you want to know why I love The Human Rights Film Festival it's because they bring great films like this to our attention.

A must see- go get tickets. 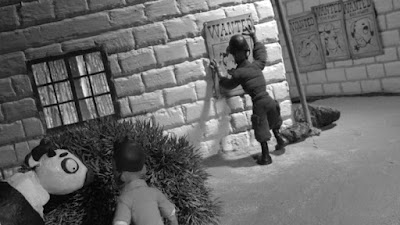