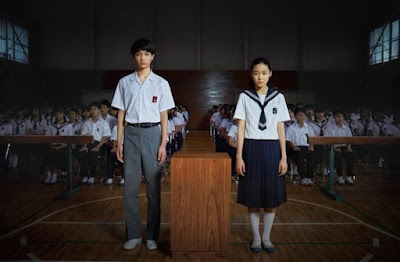 The most striking aspect of Solomon’s Perjury, a two part suspense story of near epic proportions from Japan presented at this year’s New York Asian Film Festival, is the grave seriousness with which its mostly adolescent cast of characters is presented. You’ll find no catchy pop anthems, catch phrases, or cool posturing here. The adaptation of a series of novels penned by renowned mystery writer Miyuki Miyabe is presented with an elegantly moody classical score and cinematography that imbues settings with a somber mood, capturing the grave expression of characters with a lingering patience. Indeed the opening scenes in which we find an adult Ryoko recounting the day when she and a classmate came across the snow covered corpse of a classmate, Kashiwagi, in front of their school building are positively downbeat.

The tale goes on to tell of the aftermath of the body’s discovery, which belonged to a high achieving student who was highly regarded by the bulk of his peers, pulling numerous characters with their own personal strife and agendas into its wake.  The principal and police’s ruling of it as a suicide does not sit well with the student body, particularly Ryoko, who leans on her detective father to investigate further. The appearance of an anonymous note alleging the witnessing of foul play further complicates the case. But the accusations lying within are also far from infallible. Losing faith with the resolutions reached by adults, the classmates of Kashiwagi, along with a suddenly appearing figure from his past, decide to stage a mock trial with judge, attorneys and an audience of students, parents, and teachers alike. Yes it’s far-fetched and a bit surreal to behold, but the commitment to the premise by all hands on deck makes it work.

It took a significant amount of planning and attention to detail to connect the many disparate aspects of the mystery together, and link them each to one of a bevy of social problems facing current day Japan, particularly its youth: themes of bullying, social ostracism, mental disorders, overindulgent parents, abusive relationships are all woven into the narrative’s tapestry. It can’t help but come off as a bit contrived at times. One also feels this during some of the numerous dialogues between characters, which are often prone to consisting of moralistic diatribes. The at times artificial tones are often made up for, though, by the film’s grand ambitions. 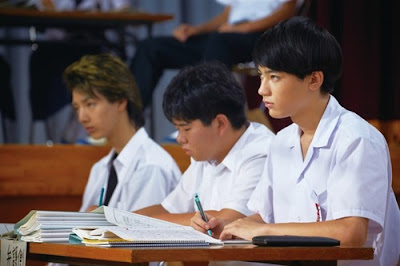 Truly the story shares the same weighty tones as Battle Royale when it comes to presenting the strife and spirited resistance of its teen protagonists, even in this more down to earth scenario. Yet, where Kinji Fukasaku’s modern classic doled out virtue and folly in equal measure, Solomon is characterized most by positivity, in which the pursuit of truth and genuine justice is the norm among its teen students. There is an infectiousness about the film’s stubborn optimism that propels the film forward, achieving a familiar feeling after a while, and able to turn cynicism into hopefulness.

As many film adaptations of literary works are wont to do, part 1 of Solomon suffers a bit from too many details being put into play. While the beginning feels tightly wound around a handful of key characters, the story spreads to involve numerous others with pacing that sometimes leaves some aspects of the story cold for too long before returning to them. Part 2, however, benefits from launching right into the pivotal action: the setting up of and proceeding of the trial that unlocks the difficult truths behind the incident in question.

While presented as two films, I think it best to refer to them as parts because Solomon is essentially one movie split into two, probably due to its extensive length. While the first part does feel a bit more unwieldy due to the challenging task of setting up so many plot elements, part 2 is equally long. Here it is worth noting the story’s tendency to indulge in melodrama, a good deal of it occurring, not surprisingly, in the film’s final act.  It is, again, a tradeoff of possible heavy-handedness and admirable aspirations. There is a sense that director Izuru Narushima wants to extend the scope of Miyabe’s novel and bring about cathartic healing by confronting and tearing the band aid off these widely faced social ills. I cannot help but applaud the effort.

A performances by Mizuki Itagaki as Kanbara, the stranger from the deceased student‘s past is worthy of the term ‘break out,’ as he passionately navigates a path of demanding accountability for the behavior of his peers from on high while carrying his own heavy burden. It's a commanding performance that can easily be likened to that of a Kenichi Matsumoto, who first wowed viewers as L in the Deathnote movies. Ryoko Fujino, playing the student who found the body, appears here in her first major onscreen role and delivers a more subtle but very impressive turn. Her often wide eyed and inquisitive expression is quietly and determinedly piercing, as if seeking out truth from everyone she encounters. 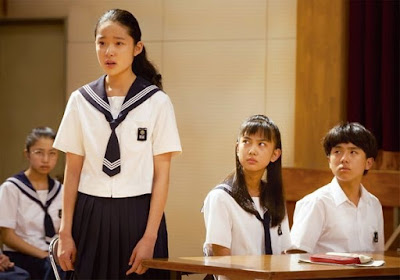 The New York Asian Film Festival presents this present day pop culture artifact from across the ocean, as only the do. Curiously the films are not presented back to back, perhaps allowing audience members to gather their thoughts before taking on its conclusion. It seems important to watch both to really feel the weight of the story, but part 2 is essential for seeing how the tale is resolved.

Solomon’s Perjury Part 1: Suspicion is being screened on Sunday, July 5 at the Walter Reade Theater, while ‘Part 2: Judgment will be shown Friday, July 10 at the SVA Theater. Plan accordingly. Visit the Subway Cinema website for more information and tickets.
Posted by mondo_curry at June 30, 2015