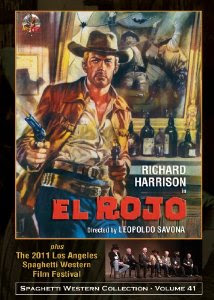 ROJO is an entertaining but nothing new western starring Richard Harrison. It’s the entertaining part that is the reason I’m writing this up.

The film opens with the massacre of a family in transit by “Indians”. They are traveling to join one of their number who has struck it rich with a gold mine. Flashing forward a number of years we follow a “man with no name” as he makes his way to Goldhill, a town that sprung up around the mine. Hooking up with a crazy munitions man Rojo aka member of the slaughter family, begins to bump off the town elders. It seems they were the ones who killed his family all those years ago.

Pretty much a standard “you killed my family” revenge plot is enlivened by some intriguing characters. The afore mentioned munitions expert is a hoot and a half as he comes up with wild ways to kill. Also enlivening things is the masked Black Bart, a hired killer who is extremely mercenary in all he does.

Is this a great film? Not even close but it’s not taxing and perfect for a night on the couch.

The film has been released by Wild East on DVD. As a bonus the company has included three Q&As from the Spaghetti Western Film Festival in 2011. The talks are great for anyone who loves the genre.
Posted by Steve Kopian at June 14, 2015

Email ThisBlogThis!Share to TwitterShare to FacebookShare to Pinterest
Labels: western