DOOMSDAYS (2012) is finally coming to theaters and VOD friday 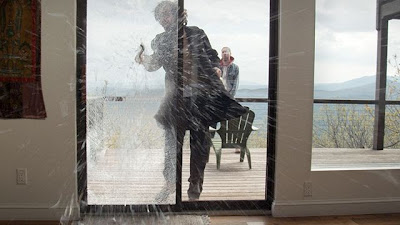 DOOMSDAYS is hitting VOD and theaters on Friday. The fact that the film has taken three years to get off the festival circuit and into a regular release confuses the hell out of me- I mean this is really really funny film. I’ve actually seen the film a couple of times now and I’ve laughed at it each time. Audiences love this film a great deal. I’ve seen them laugh their way through it. Based on what I’ve seen this film should have been in theaters long ago.

Despite seeing the film more than once I’ve only written it up once for Fantasia in 2013. It’s a short review because I thought it was going to hit theaters and it wouldn’t need my words. I’ve tweeted the review in connection with other festivals over the years. Now with the film hitting theaters I’m reposting the review:

Two friends travel through the Adirondacks breaking into empty, and not so empty, vacation homes while waiting for the end of the world they know will come (we are running out of oil after all). Their travels brings them in contact with various people to whom they tell various stories, some which, like their actions, come back to haunt them...

Amusing film that is billed as a pre-apocalyptic comedy. Actually I'd say it's just a funny inde comedy regardless of the apocalypse.

I really don't have much more to say than that other than I enjoyed it- but regrettably it got lost in the crush of other Fantasia films. Definitely worth seeing when (it hits theaters Friday)