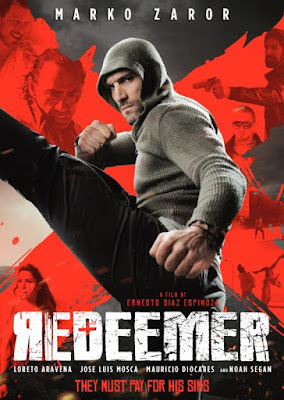 Why should I be afraid of a man who carries an altar everywhere?

All hail the next big action star Marko Zaror

Zaror stars as an ex drug cartel hit man turned divine vigilante looking to redeem himself for all his past deeds. He ends up on the wrong side of a drug cartel looking to get some stolen money back. He also has to contend with a mad man seeking revenge for his past deeds by killing everyone Zaror has ever helped.

A pure popcorn B movie of the sort that would have been released by Canon Films 30 years ago this is exactly the sort of film you want to see with a bunch of your best friends in  run down theater on a rainy Sunday afternoon or your living room with some adult beverages. This film starts and then just goes.

Beginning with a fight that riffs on the theater fight in A CLOCKWORK ORANGE the action comes every couple of minutes in fight scenes that seem to play out in a realistic and extended fashion. Zaror doesn't just bet people up he breaks them before he kills them. Blood flows. The combination of sound design and camera placement assure that each punch and kick explodes off the screen in a very visceral sense. You feel each hit with a thud in your chest. Its a sensation that I've never felt in a film before.

That the film works as well as it does is largely do to Marko Zaror.  A tall thing physical presence he makes it all look easy. Every one talks about Tony Jaa or Iko Uwais as being action stars with an ease of movement but I would argue that they pale in comparison to Zaror who punches and kicks and jumps in a way that seems weirdly natural. You think "Of course he moves this way- he's always moving this way right?" Wrong. its something else entirely. Jaa or Uwais will re-position themselves to be ready to fight while Zaror just explodes. However he's standing or situated makes him just as ready as those other guys are in their action stance. Zaror's fighting seems to be an extension of his soul.  You watch him and can't believe that anyone would be stupid enough to stand up to him. I want to go back and watch MIRAGE MAN and MACHETE KILLS again just to see him.

This is a wickedly cool must see film with one real irksome flaw- the blood is largely CGI. As good as the fighting is all of the blood and carnage is computer generated. Its would be find, but almost all of it looks fake. Its doesn't wreck the film but it drops the film down a notch because its so noticably fake.

However despite the flaw this is a must see for action fans. Go see it.

The film hits theaters and VOD this Friday.