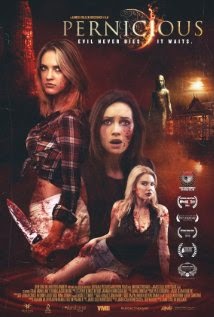 Coming on the 19th to VOD and theaters is PERNICIOUS, a small but good little chiller that has the misfortune of coming out after just over 6 months of great horror films.

The plot of the film has three American women going to Thailand on the adventure of their lives. Quickly things go south the girls make contact with a mysterious young girl-one that only the can see- who wants them to find certain lost statue.

While the film and it's plot  isn't anything that hasn't been done before, the film still manages to be entertaining on its own terms. It manages to walk the fine line between humor and horror that works in it's favor when the humor bleeds away in the final reels. If you like gruesome this film goes there.

I feel sorry for this solid little film. I know that the film is going to catch a lot of flack for not being as good as many recent films (WE ARE STILL HERE, LADIES OF THE HOUSE, IT FOLLOWS,  BABADOOK and GIRL WALKS HOME ALONE AT NIGHT among others). While it's not right to compare films, especially when the films are of different types, in the current situation it's unavoidable- therre have been too many classic and near classic films. Somehow horror filmmakers have been treating audiences with their blood soaked gifts.

Under normal circumstances PERNICIOUS and it's well done handling of well known tropes would have been a welcome respite from some of the real crap horror films produced every year. Unfortunately most people watching the film right now are going to think the film sucks, when it fact it doesn't. This is a pretty good little popcorn film. Its good little distraction.

If I maybe so bold as to make a suggestion, you'll want to to make an effort to see this film, However if you're still reeling from all from all of the great recent horror films, hold off for a bit. Try a few other films first. Cleanse your palate of the recent batch of films and then come back and try PERNICIOUS. I say this not because the film is great, its not, but it is good enough that it deserves to get a fair shake.

The film hits VOD and Theaters Friday
Posted by Steve Kopian at June 17, 2015