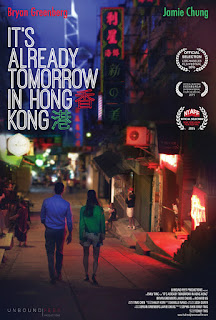 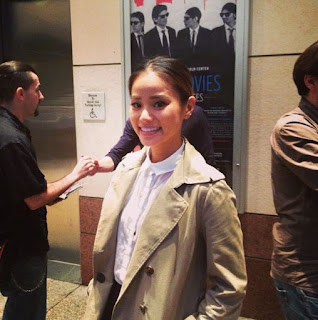 The opening weekend at the 2015 New York Asian Film Festival had me all tweaked out for films with disturbing characters involved with murder and psychological thrillers at psychiatric hospitals in Hong Kong which had me wanting to try the drug ketamine to sedate my racing thoughts. Now, along comes the screening of It's Already Tomorrow in Hong Kong and I was like ok, two american ex-pats from the States working in Hong Kong - they meet by chance at Fragrance Harbour (Hong Kong), have passionate sex at one of the slimey hotels at Chung King Mansions, and the story begins there with a crime of passion and someone getting dismembered.

Back to reality - now let me start with the real story of It's Already Tomorrow in Hong Kong. The skinny: One american gweilo ex-pat from New York meets a Chinese american girl from L.A. while visiting Hong Kong and they walk and talk discussing their unfulfilling relationships as they enjoy each other's company. Another chance meeting the following year at the Star Ferry heading towards Kowloon, they enjoy each other's company again and begin wondering if maybe they are both in relationships with the wrong partners. I hate to use the word cute - ok maybe it's more charming and innocent but It's Already Tomorrow in Hong Kong is kinda cute. It's simply a quiet relationship movie teetering towards the fringes of romance. The two players in the film, Jamie Chung and Bryan Greenberg had great chemistry on the screen which is not a surprise since they are in a relationship together and engaged to be married in real life. The actors didn't seem like they were acting and we the audience were just flies on the wall. The film also doubled as a public service announcement for tourism in Hong Kong as both of these characters show us the local sites in Hong Kong Island including Central, Mid level escalators, Soho, & Lan Kwai Fong districts as well as taking us across the harbor to Kowloon on the Star Ferry to Tsim Tsai Tsui, Nathan Road with Chung King Mansions to pick up a suit, to shopping at Lady Street, & stopping by at a Cantonese opera singing performance on Temple Street. From some of the panoramic shots of HK, the Sogo department store area in the Times Square scene had a lot of video play, too! Ok, this film has got me hankering to look for flights to HK! But in all seriousness and comedy, It's Already Tomorrow in Hong Kong is a charming movie about two individuals that we can relate to and who are very likeable. I'm honestly hoping that there's a sequel here. And please don't take the story to New York City or Los Angeles. Grab some popcorn and snuggle with your honey bunny to watch It's Already Tomorrow in Hong Kong. If you're a dude and you're flying solo, don't tell the fellas' about the rom-com play! See y'all in Hong Kong!

-Thanks to Chocko for recording the Q/A after the screening of It's Already Tomorrow in Hong Kong with Jamie Chung, Bryan Greenberg, & director Emily Ting on the panel!