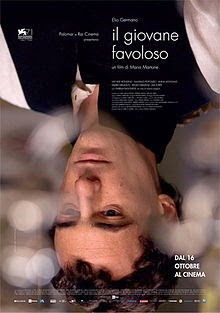 This is the award winning film biography of Italian poet Giacomo Leopardi. Locked away from an early age by his aristocratic father so that he could better himself through study, he longed to see the world. However once he got out he struggled to balance family, the call of the real world and his need to create some of the most moving poetry the world has ever known.

This is a beautifully crafted film. Everything from top to bottom is perfect from the sets, the costumes the photography, the cast and even the script. Its a film that has rightly won a boat load of awards around the world.

On the other hand I never connected with it. This isn't to say that the film is bad, it's not, it's far from that, Rather its to say I never quite found away to connect. I suspect the mannered nature of the telling, its very formal almost painterly, that kept me distant. Perhaps had I not seen this at home as a screener I would have liked this more.

As it stands its an eyecatching trip to another time and place and highly recommended for those who love historical dramas.

The film plays tomorrow and the 10th at Open Roads at Lincoln Center.