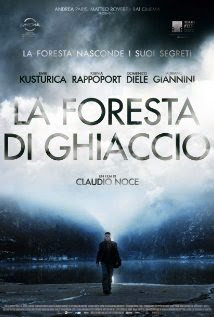 If it wasn't for the make of cars and the language this would be a thriller set in the American Rockies since everyone dresses with baseball caps and cowboy hats. You can see the film being recast and remade with American actors because the film echoes any number of American films...

But the ICE FOREST is set in the Italian Alpine where in a remote village that has become prone to blackouts an electrician has been dispatched to fix the generating station. This sets in motion a series of events that some how harken back to a night 20 years earlier when a tragedy involving illegal immigrant occurred. Also a wild life officer isn't quite who she seems to be, she in fact a detective looking into the death of a young woman found frozen to death just over the border.

This is a very good thriller that is almost great. There is a real sense of tension here and some killer set pieces, especially late in the film that made me kind of wish that this film had been just a tad more original.

There is a reason I opened talking about how much this film feels like an American set thriller and that feeling is way too strong for this film to ever work on its own terms, simply because the film doesn't really have it's own terms. Seriously when you see this film you tell me if the female detective wouldn't have been cast by a young Holly Hunter a few years back or perhaps Kate Beckinsale now or Emma Watson in a another year or two.(Hell, Beckinsale played a similar role in WHITEOUT).

I really like this film but at the same time I hate that I spent most of the time I was watching it trying to sort out who was going to play who in the American remake.

Is this film worth seeing? Oh most definitely. Its a fine little thriller. I just dare you not to think about how to remake it.