Vault of Walt 1-3 by Jim Korkis 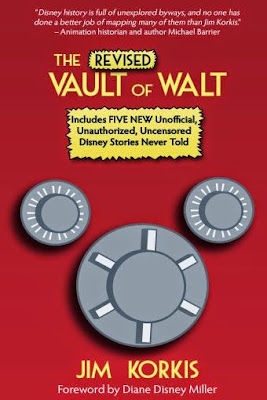 Jim Korkis's three volume (so far) collection of pieces on forgotten or really not well known tidbits on Walt Disney, his company, his films and his parks are an amazing read. They the equivalent of looking at a big beautiful painting that you've seen every day of your life, like the whole of Disney, and then having some one come up and showing you all these little things hiding in the nooks and crannies that you not only never noticed but never thought would be there.

As far as I'm concerned Jim Korkis is a god. He's some where beyond a living encyclopedia and a genius and moved into god status. How else do you explain how one man can know so much about not only Disney but all of animation. Its unnatural and we should bow down to his vast powers.

The Vault of Walt series started a couple of years back with a single volume. I have it some where in the collection. I read it and enjoyed it a great deal. I thought that was that. However recently I stumbled across the fact that Korkis had updated the first book and then added two more to the series. I did what any self respecting film fan would have done, I bought the two new books and the revised first one as well.

What's so cool about the books is that they don't cover just one topic. Korkis has each book divided into roughly four parts:

STORIES OF WALT- these are pieces that highlight stories about Walt's life. We get stories of his growing up, his family and his passions. What is so special about them is that Korkis takes one piece say Polo or his smoking and he goes into detail on that one subject. The detail is the sort of thing that wouldn't even make a detailed biography simply because there wasn't enough space. Since the five or ten pages don't have to tie into anything you get a clearer picture of things.

DISNEY FILM STORIES are just that, detailed examinations of the stories behind some of Disney's lesser known films. The ARISTOCATS is explained in detail, SO DEAR TO MY HEART,  LT ROBIN CRUSOE USN, or even BLACKBEARD'S GHOST.  These sectionals will also go into various stories about Mary Poppins with pieces in Volume 2 and 3 going into great detail about the efforts to get MARY POPPINS made as well as the real story behind SAVING MR BANKS. Trust me you don't know these stories.

DISNEY PARK STORIES go into great detail about the various rides and attractions. Korkis explains why the various Disney parks are the way the are, why promised rides never happened and how some attractions have changed over the years. EVen for someone like me who has never been to the parks, its fascinating reading.

OTHER WORLDS OF DISNEY are stories of things that didn't fit in any of the other sections. Here we get the stories of Krushchev's desire to go at the height of the cold war, Frank Lloyd Wright's hatred of FANTASIA, Chuck Jones' time working for Disney, Disney's hatred of Friz Freeleng, the birth of Disney Fandom and Disney's connection to Norman Rockwell. Its all cool stuff and its the answer to trivia questions you can use to stump your friends. 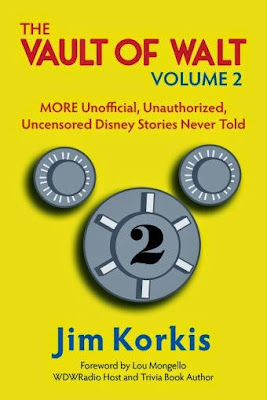 For me this isn't three books but one giant book with three parts. I've stopped refering to them as a separate volumes and talk only of them together. I recently told a huge Disney fan friend that he should read the Vault of Walt, He asked which one should he start with and I said "all of them"

These books are so good that I can't really review them I can only tell you about them and threaten to beat you senseless if you don't go out and buy them. (Yes they are that good) Seriously the material in the books is so consistently good that the only time you kind of feel let down will be when a piece that would in another book be incredible, doesn't live up to the chapters around it. (I say this from experience having gone back to a chapter I didn't love for reference only to wonder why on earth I didn't love it-because the others around it were even better)

Available from Theme Park Press, Amazon. and other booksellers 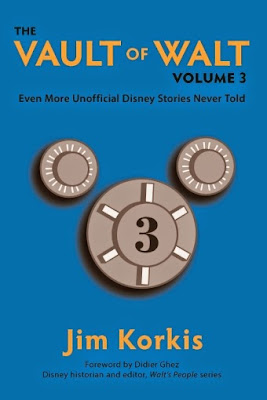